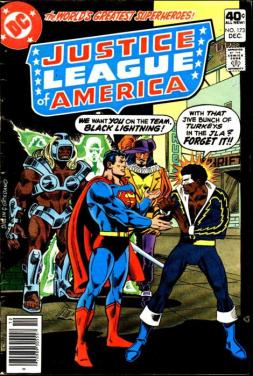 “You’re the second donkey who’s tried blastin’ me away tonight, and like I tole the other fella, you got a lot to learn ’bout Black Lightning!”–Justice League of America #173 This week there was a disturbance throughout the geek “interwebs” after John Hugues at Comics Alliance published an article titled Outrage Deferred: On The Lack Of Black Writers In The Comic Book Industry. This has led to talk of Dr. Jonathan Gayles’s 2012 documentary, White Scripts, Black Supermen: Black Masculinities in Comic Books. We’re also fast approaching the anniversary of the birthday and death of black comic book pioneer Dwyane McDuffie. All of this has magnified the usual buzz on race in comic books. And it jogged my memory. Back in 2000, I actually wrote on this very topic, as part of a presentation for a friend’s Blacks in Media course. In the fast-changing world of comic books however, that is of course several dozen crossovers ago. Nevertheless, given all the recent talk, decided to dig up the article and thought, what the heck, it’d make a decent blog. END_OF_DOCUMENT_TOKEN_TO_BE_REPLACED