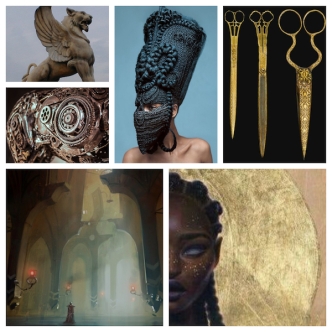 A few thoughts on my latest published short fantasy story “A Tale of Woe”–featuring a magic-wielding heroine gifted with a peculiar second sight, an insatiable goddess who feeds on the misery of mortals, and a city on the brink of disaster.

Fantasy and world building. They’re my two favorite-est things in genre. Nothing I like more than a fantasy world that’s fleshed out, with its own history and depth. I want to feel as if I keep peeling, there’ll be more and more layers to discover. I grew up on world building tomes like David Eddings’s Belgariad and the Malloreon. Graduated to epics like Robert Jordan’s Wheel of Time. and Steven Erickson’s Malazan. I now sit enthralled with works like N.K. Jemisin’s Inheritance Trilogy, Ken Liu’s Dandelion Dynasty and Kameron Hurley’s Worldbreaker Saga.

Not surprising then that my own writing plays big on world building. Whether its steampunk alternate world stories like A Dead Djinn in Cairo or my upcoming novella, The Black God’s Drums (more on that later!), I like creating  spaces for my characters to romp in. I tend to think of my stories as corners in a broad tapestry. I may be directing the reader’s attention to this one particular section–but I want them to feel as if there’s A LOT more if they were to step back and take a look. What are the hiearchies and conflicts of a world? What are its histories? Who are its different peoples? What are its scents? Its foods? (Foodbuilding is essential to worldbuilding!). Its culture, languages, colloquialisms, and folkways?

Fantasy allows me to do this perhaps more than any other SFF genre. In alternate world stories, I have to do lots of historical research. Even with the all-important Point of Divergence, most alternate world stories make you stick to some parts of our history. In fact, the best alt-world stories (IMO) master this trick. You read Justina Ireland’s Dread Nation, and what works so well are all the bits and pieces from our own world tossed in: from a town called Nicodemus to American chattel slavery to the infamous Indian Boarding Schools. Don’t get me wrong. As a historian, I love creating counterfactuals for precisely this reason. But with fantasy, the rules are a lot more relaxed. I can go where I want. I can let my imagination run wild.

“A Tale of Woe,” published in Issue #253 of Beneath Ceaseless Skies is one such story. In many ways, this was a milestone. For one, I’d been trying to get published in BCS now *for a minute.* It’s been one of my favorite online magazines of fantasy. The stories are rich and masterful and well-crafted. And the world building is bananas! You ever get the chance to listen to the audio podcast of Peter Darbyshire’s The Angel Azrael Delivers Small Mercies from BCS Issue #102 in 2012, you DO IT.

I think I was rejected by BCS bout 4 or 5 times over a span of 6 years. But that’s what this writing life is about. Storm the walls of the castle again and again–until you can get your troops inside. Only don’t mercilessly slaughter the editors. We’re not into editor-cide here. Instead, yell out a few WOOTS! and thank those editors for taking a chance on letting you in the castle.

The second milestone is that A Tale of Woe is my return to writing fantasy. Not just fantasy, but truly fantastic secondary world fantasy. Much of my past published fantasy stories, while set in a secondary world, tended to draw heavily on our world–in particular Africa. Following in the steps of the likes of the great Charles Saunders, I often draw on the continent to create my worlds of fantasy–if only to bring some balance to the Eurocentric dominance in the genre. My stories like Shattering the Spear (2011) published at Heroic Fantasy Quarterly or the recent reprint Ghost Marriage (2018) at Apex both come out of this style. The closest I came to trying my hand at something else was in the story The Things My Mother Left Me (2016) published in Fantasy-Magazine/Lightspeed. While that story used Africa as a clear inspiration, I quite purposefully filled the world with unexpected elements–from six-legged predator cats to a Jab Man.

I’ll still be doing exactly that type of fantasy. Because it’s still needed. And because I really like doing it. A Tale of Woe, however, offered me the chance to break away from our own world (as much as that’s ever possible in fantasy) in ways I hadn’t before. Certainly, I plucked bits here and there from our world’s history and cultures. But I purposefully sought to make them unrecognizable. That, or you’d have to do some serious work to figure em’ out. I wanted the world here to seem completely fresh, new, and unfamiliar. If my usual approach at world building is a bit of pelau, consider this an unrecognizable stew. But enough with the food metaphors. What’s the story about?

A Tale of Woe centers around a young woman named Rana who has arrived in the holy city of Aruth. She’s on a mission for the Order of Soothers–a secret society of women gifted with a second sight that allows them to see the pain and misery in others. Rana, like all Soothers, is an acolyte of the Goddess of Sorrows. And by the deity’s judgment, one’s misery can be healed or made terribly (fatally) worse. In Aruth, however, Rana will find her faith tested, as she is forced to confront the very woe she carries with her.

And that’s all. Because of COURSE you want to read the rest at A Tale of Woe.

Pictured above and below is an aesthetic I created for the story. Often, writers make these to help them get through a project. Or even start. It’s a good way to get inspiration for your WIP. Me, I tend to make these once I’ve finished. To look for images I think best fit what I’ve created. 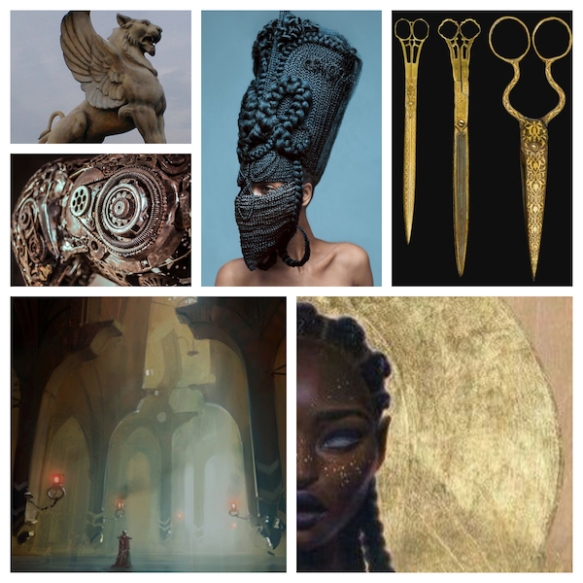