My latest published story The Paladin of Golota is out this month in Issue 37 of Heroic Fantasy Quarterly. It’s about a young boy who must decide whether to help a warrior fulfill her dying wish. Also, worms. Giant, man-eating, monstrous, demonic worms!

Stories have weird origins. This one started with a Jay Electronica track. Or, better put, a skit. I won’t name it either. Some of you are like, who the F–K is Jay Elec–and I gotta stop you right there and say go check out Exhibit C. So, anyway, I’m listening to that unnamed skit on that unnamed Jay joint, and BAM! there it is.

I envision a plain after a battle. Or, perhaps a set of bedraggled soldiers limping back from a battle. They’re all women. The landscape is arid but with scrubs of greenery, like someplace perhaps in East Africa. It’s a fantasy setting, so the  soldiers are all wearing chain mail uniforms, with conical helmets like I’ve seen from parts of medieval Africa. Their mounts are giant lizards or beasts similar to dinosaurs. I TOLD you it was a fantasy! Most are dead or dying. Wandering among them are very lively children, youths who bring some of the wearied soldiers water. Others who are there to rob the dead. They argue among themselves over their spoils, as the scene pans out to show hundreds of the soldiers laying with their dead reptilian mounts across the vast plain.

And that’s it. That’s the image I conjured up. Every time I heard that one skit, the image grew more vivid. I could see the plain of the dying. I could hear the children arguing among themselves. I could see the soldiers clearly, imagine their leaden footsteps, or the cries they emitted as they lay near death, smell the blood and sweat on them. Well, okay. Not really smell, but I could imagine to that detail. The whole thing became more real with each listen, and I knew there was a story in there somewhere.

Stories require more than some imaginative imagery. I needed to fill out what I had, give it some depth and weight. What battle had these soldiers been in? Had they won or lost? Who were these children among them? Which characters would shine through to give us a glimpse at what was going on? How could I turn this scene into an actual tale worth telling?

Took maybe about a year, as I devoted myself to other projects. But when it came time for the story to take shape, it did exactly that. I pulled out my handy black journal and jotted down the entire plot. The characters. The whole story line from beginning to ending. Then I threw it somewhere and went about living my life. That’s also writing. Keep your ideas and get back to it when you can. When the story’s ready to be written, it’ll be written. No need forcing it.

Sometime last summer though, I had a spare moment and the time was right. So I sat down and wrote The Paladin of Golota. The story went through several versions. As is usual with me, I really got into the world building. At one point, I looked up some 2,000 words in, and realized I hadn’t even actually started the story yet. I was just having fun creating the world. It’s got giant battle lizards! Got myself under some discipline tho, and finished the whole thing in about a week or two. I then sent it to two trusty beta-readers who gave me great feedback (thanks Troy & Kirk) before shooting it to the folks at Heroic Fantasy Quarterly.

After a stretch of waiting (that’s what submitting is–waiting), I got a thumbs up! HFQ wanted to publish the story! And this month, in Issue 37, it’s one among a set of summer tales of heroic fantasy. Woot!

*This is my third published peice at HFQ, the first being Shattering the Spear in 2011 and With A Golden Risha in 2015.

Even got some art, by Skye Hembree:

The main protagonist in The Paladin of Golata is Teffe, a young boy from Am Amara. As I state in the story:

Golota lay just outside Am Amara, the only home Teffe had ever known. The settlement of squat mud brick buildings—called yaddi after the spiced bread of similar hue and shape—was marked on most maps simply as Mara. Trader’s charts commonly indicated it with its goods: potable water, blocks of fire salt, and quaj—the addictive sour-tasting leaf coveted by hermit mystics and banned in larger cities.

Told ya I liked doing the world building thing.

Teffe is a Picker–the name given to street children who venture out onto the plain of Golata to “pick” after the remains of dead warriors after a battle. It’s on one of his routine jobs that he comes across Zahrea, a warrior who is not-quite-dead, but seemingly dying. Zahrea, it turns out, has come to Golota as part of a holy quest–to reclaim the Third Heaven.

The Third Heaven had fallen, the priests and sages decreed: lost to demons crawled up from the Under Realms. Now the gods summoned their believers to help take it back, offering promises of life everlasting. There was, however, one catch: you had to die to be chosen a holy warrior of heaven. On battlefields like Golota the world over, the faithful now butchered each other, hoping to attain eternal glory. The gods, Teffe had decided long ago, were monsters.

Teffe, a skeptic at heart, could care less about gods or holy quests. But Zahrea will soon make him a tempting offer, one that even his skepticism will find a hard time refusing.

But I’ve said too much.

Oh! I forgot about the worms!

Worms had appeared after the first clashes on Golota. Some believed they were called here by the screams of the dying. Others that they’d always slept beneath the earth and were awakened as blood watered the soil. Whatever the truth, worms ruled the plain at night. They burrowed up to devour anything on the battlefield—living or dead, flesh and bone, even steel.

The Paladin of Golota was a delight to write. I had fun doing so. Pure heroic fantasy with the requisite monsters! I made one of those #ThursdayAesthetic collages for it. As usual, I did it backwards. That is, I already knew what was going into the story so these images weren’t inspiration. But they all tell certain parts of the story, which I’ll explain below. 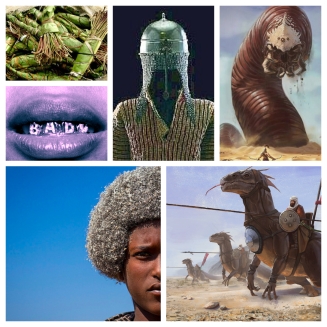 From Top L to Bottom R.

(1) Photo of bushel of khat–a stimulant chewed as leaves, popular in much of the Horn of Africa and the Arabian peninsula. It’s origins are thought to be in Ethiopia, and it may have been known by the ancient Egyptians. As my world building takes inspiration from Eastern Africa, khat makes its appearance as the addictive quaj. Like the real-life khat, the mythical quaj’s use is also controversial and at times banned. But it plays a decisive role in the story.

(2) A mouthful of bling, courtesy of Erykah Badu. Pickers like Teffe aren’t just there to rob the dead of the items worn on their bodies, but also in their teeth. In this world, warriors are fond of filling their mouths with decorative jewelry–gold, gems, and other pricey items that Pickers pilfer. Think of this as my ode to grillz as the creative and time-honored masterpieces of art that they are.

(3) A suit of armor from medieval Sudan, complete with a conical chain mail helmet and a long padded quilted robe (jibbah).

(5) Photo of Awol Mohammad, of the Afar region in Ethiopia. Photographer source: Eric Lafforgue. Teffe is younger than Mr. Mohammad, but the hair is perfect.

(6) “Desert Rider” by artist Asim Steckel. You set out to search for giant lizard mounts on Pinterest, and this is what comes back. It’ll do.

The Paladin of Golota can be read at Heroic Fantasy Quarterly. Hope you enjoy it.