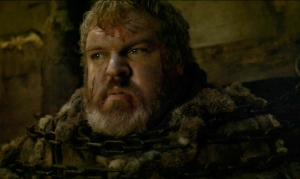 Another Sunday, another Game of Thrones. In which we learn, much like the Wu, Hodor-Bran ain’t nuthin’ to f*ck with. Many spoilers to follow.

Things kick off with young Tommen receiving the crown, being branded “First of His Name” and thus the latest inheritor of the Iron Throne. Long may he reign! But if past rulers are anything to go by, don’t put too much stock in that kid. He can’t seem to keep his gaze from Margaery Tyrell, who like a creepy child molester stands off to the side staring slyly at him. Sitting on his throne, he receives the notables of the kingdom, all the while making googly eyes with Margaery. That is until Mama Cersei catches on. After blocking Tommen from view, she shimmies over to Margaery. At first it looks like sh*t’s bout to go down, but Cersei tells her to be at ease. They begin talking about the late Joffrey and Cersei reveals that she knew he was a monster all along. It seems in fact, that in Tommen she seeks some form of redemption or (as Margaery calls it) consolation. They all show far too much teeth, but no bite–at least not the kind you can see.

Cersei and Pappy Lannister plot and discuss the marriages and alliances that are to come. First between Tommen and Margaery Tyrell. Then between her and Ser Loras Tyrell –who is totally completely definitely into women. Pappy Lannister reveals to Cersei that the Lannisters are broke—broke as hell. They’re all in debt up to their eyeballs to the Iron Bank of Braavos (3rd mention) and these marriages and alliances are necessary to keep the creditors at bay. Cersei points out to Pappy that he had started wars and done all manner of unsavory acts to keep the legacy of the Lannisters alive—and that Tyrion (that guy in the dungeon, who her father will sit in judgment upon) nearly ruined all that by killing Joffrey. Jury tampering, Cersei style.

The Viper (who seems to be constantly interrupted) later receives an unannounced visit from Cersei. The two walk and discuss family business, as well as Tyrion’s upcoming trial. Cersei inquires as to how her daughter Myrcella is doing, who was sent off by Tyrion to Dorne. The Viper says they don’t hurt little girls or boys in Dorne–an allusion to the death of his sister and her children at the hands of the Mountain, for which he still seeks vengeance. Cersei retorts everyone everywhere hurts little girls, and asks him to send her daughter her love.

Across the sea, Dany learns Joffrey is dead. New Daario has managed to capture a fleet for Dany, and she wonders if she has enough yet to return to Westeros and reclaim the Iron Throne. Her “old bear” Ser Jorah Mormont however warns that Dany only has enough to take King’s Landing; enforcing her power over all the feuding houses of Westeros will be no easy feat. He also tells her of news in Essos. Without the Unsullied, the liberated city of Yunkai has fallen back to the Good Masters. Astapor as well is in chaos. A dismayed Dany ponders how she can possibly rule the Seven Kingdoms if she can’t even tame the cites she has already conquered. Gone full savior, she’s determined to see her plans for a liberated Slaver’s Bay fulfilled—and decides she will stay in Essos just a bit longer.

Elsewhere in Westeros, Littlefinger and Sansa reach the impregnable Vale of Arryn, with Sansa playing the part of his niece. Young Robin Arryn is right where we left him, suckling at the breast of his mother the Lady Lysa. Kid’s like damn near a tween. Milkman. Lysa’s crazy eyes also see through Sansa’s ruse, and she welcomes her sister Catelyn Stark’s daughter–but tells her to keep that knowledge quiet. Lysa’s been having a tryst with Littlefinger, who it seems took her “maidenhood.” She then starts spilling the beans, naming him the mastermind of the plot to kill her husband (in which she participated) and helped spark the War of the Five Kings. Peter stops all this with a kiss, telling her the deed is done. He tells her to give him a chance to freshen up, change and they’ll be married soon after. Lysa ain’t hearing that. She opens a door and has a priest brought in to have them married right damn now. Probably the first time Littlefinger has looked “stunned” this whole series. She says she wants to make love to her husband and scream so loud she’ll be heard across the Narrow Sea—which she does.

The next day, Lysa plies Sansa with sweets, tells her she’s pretty, and then asks why Peter saved her. She goes all crazy eyes for a moment and accuses Sansa of sleeping with Littlefinger. A shocked Sansa denies it. But Lysa says what we all know–that Peter has a perverse “thing” for Sansa because she reminds him of his unrequited love for Catelyn Stark. When she tells her aunt “you’re hurting me,” Lysa just keeps on hurting her until Sansa cries and begs her innocence. A seemingly satisfied Lysa flips on a dime and soothes her tears, saying everything will be fine—because soon (in her guise as Littlefinger’s niece) she’ll be able to marry her son. That creepy kid Robin. Her cousin. Sansa makes a face at that, as if wondering for the first time–“what the hell have I gotten myself into?”

Somewhere on the road, Arya is doing her nightly countdown of men she wants dead. When The Hound tells her to shut it up, she replies she only has one name left—“The Hound.” So much for that buddy-buddy spinoff we were all hoping for. He wakes up to find the youngest Stark girl missing. Searching frantically, he finds her practicing with her recently re-acquired Needle at Braavosi “Water Dancing.” When The Hound makes fun of her old teacher Syrio Forel for getting himself killed, she takes it personal.A mocking Hound tells her to give her training a try. She flows into a form and stabs him in the belly with her blade—only to have it stopped by his mail. After backhanding her to the ground, The Hound takes Needle away and says her old teacher is dead because other men have “armor and a big fucking sword.” Well then. There’s that.

Podrick Payne can’t ride a horse. Like for real, he sucks. Brienne still doesn’t want him along. She tries to release him from his oath, but he remains steadfast as her squire. Podrick Payne can’t cook. Brienne wonders what good he is as a squire. He reveals that he once killed a man, recalling the Battle of the Blackwater when he put a spear through the back of Ser Mandon Moore’s head. Respect enough from Brienne. She let’s him help her remove her armor.

Meanwhile at Craster’s Keep, the new plot line places Locke as a lookout for Jon Snow’s men who have arrived to handle the mutineer Crows. Inside a cabin, Bran and company are held prisoner. Jojen Reed tells Bran not to be worried, because he’s had a vision of Bran surviving this to achieve greater things. Then he does this fire-handy thing that’s kinda cool. The mutineer leader Karl comes with some men to do a bit o’ rapin’ (they do that lots here) on a tied up Meera Reed. But Jojen warns them that he has the gift of sight and can foretell the future. When Karl mockingly asks if he’s seen what they plan to do to his sister, Jojen says no—because he’s seen him die, his body burn and snow fall and bury his bones.

Just then, the Nights’ Watch shows up. Jon and company start kicking ass and not bothering to take names. Locke makes his way through the fracas, and manages to find Bran. He cuts him free—then tries to kidnap him, threatening to kill his friends if he resists (and we know Locke likes to cut). He takes Bran—but then the young Stark does his Warg thing on Hodor. And he once more forms into the invincible Hodor-Bran! (cue Voltron music).

Hodor-Bran breaks his bonds like Thundarr. He chases after Locke, grabs him by the throat, lifts him high and then snaps his neck. So long Locke. And go Hodor-Bran!

A freed Bran crawls through the snow, trying to get Jon’s attention. But Jojen stops him, saying that if his brother finds them—he’ll just try to get Bran back to safety. And they have greater feats to accomplish. A reluctant Bran agrees, but says they have to at least save the captured wolves.

Jon runs into Karl inside Craster’s Keep. The two go one-on-one, with Karl doing some nifty knife tricks and lots o’ sh*t talking. He even seems to get the better of the Stark bastard. That is, until one of Craster’s raped daughters buries a knife in his back. When he turns to exact vengeance on her, Jon puts a whole damn sword through his mouth. A. Whole. Damn. Sword. Like several feet of steel in the back of the head, puncturing skull and brain, and then sliding through open mouth. Uh huh. Talk sh*t now.

Outside, the Night’s Watch compile the bodies of the dead—along with Locke who has his whole wig twisted sideways. They wonder what could have done that to a man. A Hodor-Bran that’s what! Don’t f*ck with a Hodor-Bran!

Why running through the woods of course. The frozen woods. And there’s the sound of crows all about. White Walker? Nah. It’s Ghost. Showing up to pay him back for all the torment—and likely freed by Bran. The dire wolf jogs back to Jon—reunited feels so good. Jon offers Craster’s “daughter-wives” (yeah, that’s a thing here) to come back to Castle Black. But they tell him they suffered beatings and rape under Craster, and got much the same from the mutinied Crows. They say they’ll take their chances on their own. When Jon asks them if they plan on staying at the keep, one of them spits in anger and say burn it down and all the dead with it.

And that’s just what they do.

Till next week, where maybe we’ll get another peek at White Walker daycare.

Leave a Reply to The Disgruntled Haradrim Cancel reply