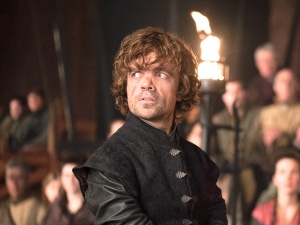 Another Sunday another Game of Thrones. Wherein we visit a bank, attempt a rescue and cook up some goat. Oh yeah. Who’s up for a trial?

We start off with the dour Lord Stannis on a ship making a journey to the bank–the Iron Bank of the Free City of Braavos. After keeping him waiting, the local bank tellers show up to tell him if he qualifies for a loan. When the Onion Knight Ser Davos Seaworth tries to introduce Stannis as the Lord of the Seven Kingdoms, the Iron Bank tellers point out that Tommen sits on the throne. They then do some figuring (if it don’t make dollars, it don’t make sense in Braavos) and point out Stannis ain’t got much collateral to come asking for money. Loan denied. That’s when the Onion Knight steps in and points out that the Iron Bank has loaned quite a bit of money to the Iron Throne in King’s Landing. He even uses his own severed fingers–payment made to Stannis for his own crimes–as evidence that it is not just the Lannisters who pay their debts. Stannis, Seaworth says, is the bank’s best hope of getting back the money already sunk into funding the Westerosi wars. The Onion Knight then pays a visit to the pirate rogue Salladhor Saan, who at present is regaling the local “working women” with humorous tales in the baths. Ser Davos Seaworth plies Saan with gold–and promises of even more gold–to join he and Stannis (who has obviously gotten his loan) in taking back the Iron Throne. So we’re going to do this again….

Out on the seas, Theon’s sister Yara Greyjoy makes her first appearance since last season, leading an army of Iron Born to save her younger brother Theon from captivity. We get to see Yara read the note sent to them from last season, along with Theon’s….toy….as Ramsay Snow has all the sex. After fighting their way through the keep, they find to their shock that Theon is not being kept in the dungeon–but the kennels. Worse still, when they try to free him, he refuses. He won’t answer to his name or go with them. Ramsay and his guards show up and in the ensuing melee, Theon even bites his sister–not recognizing her and brainwashed to accept his present status Ramsay’s pet. Yara and the Iron Born are forced to flee. When one of her men asks if she is going to leave without her brother, she admits the awful truth: her brother, the Theon we knew, is dead.

What rhymes with Reek? Leek? Meek?

Across the sea in Essos, seems like a regular day of goat-herding for a shepherd and his son–until a super-sized Drogon (them boys done grown!) shows up–several tons of fire-breathing dragon out for some barbequed goat. Later, at court, Daenerys sits upon her conquered throne in Meereen. There she is visited by the goat herder–who carries with him the charred remains of his flock. A remorseful (and somewhat guilty) Daenerys assures he will be compensated thrice over. Not all things however are so easily rectified.

The next visitor to the throne is a bit more difficult. A local Meereen noble of a powerful house, Hizdahr zo Loraq, comes to beg for his father’s body, who was among the 163 Good Masters crucified by Daenerys, in vengeance for the 163 slave children who suffered a similar fate. When she points out that the slave owners themselves were cruel, the noble son retorts his father actually decried the crucifixions and spoke out against such excesses. Dany manages to fumble up some more good excuses, but in the end wearily grants the noble son his request. As she sits atop her throne, ready to see several hundred more petitioners, it seems to be dawning on the Mother of Dragons that ruling is harder than she thought. Wait till the inevitable insurgency.

Back in Westeros, He-Who-Shits-Gold is meeting with his small council. They discuss several things, from sightings of The Hound in the countryside to the happenings across the sea. Mostly they’re concerned with the tales of Dany, her Unsullied and her dragons. After the discussions, The Viiper and The Spider have some small talk about the lands of Essos–which the Viper has visited, and recognizes in Varys. The conversation turns to sex (because all conversations with the Viper inevitably do) and the Dornish prince finds out, to his surprise, that Varys neither likes (liked) men or women. Varys tells him that in his experience such desires gets people into trouble, and without it he is free to concentrate on other things. When the Viper asks what that might be, The Spider turns an appraising eye towards the Iron Throne. Uh huh. Don’t count the crafty eunuch out yet!

But the center of the happenings in Westeros are all around one man, well half-man. Tyrion is still languishing in the dungeons, until he’s visited by Jaimie and the King’s Guard. He asks his brother jokingly if he’s received a pardon. But instead, this is a trial.

Tyrion is led in chains to his trial, where the assembled nobles and courtiers of King’s Landing are gathered. Sitting in judgment over him is The Viper, Lord Mace Tyrell and Pappy Lannister–noticeably taking the Iron Throne once the young Tommen (in a scripted pronouncement) recuses himself from the trial. As Tyrion watches, enemy after enemy–from Maester Pycelle to Cersei–takes the stand. They twist his own words against him, wielding old grievances like a knife and painting a picture of a vicious dwarf out to murder the late king. At one point Maester Pycelle even calls the late Monster the most noble child the gods have ever put on this Earth. *Retch* Even Varys testifies against poor Tyrion.

All the while, brother Jaimie looks on in doubt. During a recess, he confronts his father, imploring him not to kill his own son. Pappy Lannister assures Tyrion will get a trial and be punished accordingly–but is dodgy on the answer. Desperate, Jaime makes his father an offer–he will renounce the King’s Guard and become the Lannister heir, if Tyrion’s life is spared. Pappy agrees. He says when Tyrion is found guilty all he need do is ask for mercy, and he’ll be allowed to go to The Wall and take the black. One brother’s life for another. And Pappy gets what he’s wanted all along.

At least that was the plan, until the trial resumes, and the judges call their star witness–Shae. Ruh roh! Tyrion watches in disbelief as Shae (who by now should have been on the other side of the world!) takes the stand. Not only is she there to testify, but she is there to testify against him! In her testimony  Shae paints Tyrion as the monster his enemies claim him to be. She admits she was “his whore,” stolen from another man and forced into his service. She reveals the most intimate parts of their love life, but insists she was a prisoner to his depravities. She depicts him as hateful and monstrous. Most damning, she claims she overheard Tyrion and Sansa Stark plotting the murder of Joffrey.

A distraught and betrayed Tyrion has had enough. He declares he’s ready to confess. But it isn’t the murder of Joffrey that he pleads to. In that he continues to assert his innocence. Instead, Tyrion declares he’s guilty of being born as he is–a dwarf, an outcast. In rage and spite, he turns out to the gathered court and says though he saved their “worthless” lives, he should have let Stannis kill them all. He says that though he did not kill Joffrey, he wishes he had. “Watching your vicious bastard die gave me more relief than a thousand lying whores!” he tells Cersei–at once damning his sister’s incestuous affair, his traitorous lover Shae and the now dead former king. And the whole court room is out of order! In the uproar and tumult that follows, he rounds on his father, and claiming he knows he will receive no justice here, demands his fate be determined by the old rite–trial by combat.

Best. Come. To. Jesus. Meeting. EVER! Would have made an epic twitter meltdown.

Credits play The Rains of Castamere…. because after that, what the hell else would do?