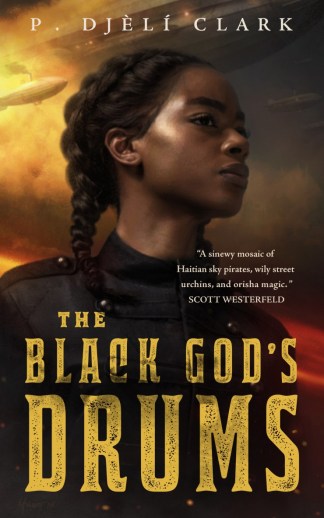 Have I really hemmed and hawed and procrastinated until the waning days of 2018 to do one of those SF/F award-y list-y things for the Hugos, Nebulas, and what-not? Absolutely and of course! Hopefully I caught ya’ll at a good time….

Hey everybody. Sorry for adding yet more to everyone’s reading list. If you find anything special, worthy, and magical in my year’s published works, and are eligible to nominate them for awards, please feel free to do so.

On with it then. 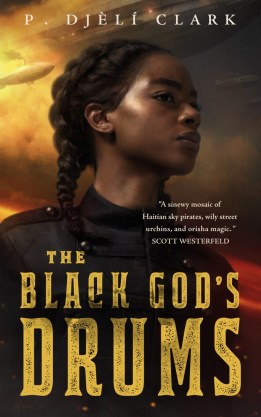 In an alternate New Orleans caught in the tangle of the American Civil War, the wall-scaling girl named Creeper yearns to escape the streets for the air–in particular, by earning a spot on-board the airship Midnight Robber. Creeper plans to earn Captain Ann-Marie’s trust with information she discovers about a Haitian scientist and a mysterious weapon he calls The Black God’s Drums.

But Creeper also has a secret herself: Oya, the African orisha of the wind and storms, speaks inside her head, and may have her own ulterior motivations.

Soon, Creeper, Oya, and the crew of the Midnight Robber are pulled into a perilous mission aimed to stop the Black God’s Drums from being unleashed and wiping out the entirety of New Orleans.

“This delightful novella is a breath of fresh air, and promises good things for P. Djèlí Clark’s career … The Black God’s Drums is, in short, a delight. I thoroughly enjoyed it, and I’ll definitely be looking up P. Djèlí Clark’s other work.” —Locus magazine

“Definitely do not miss this lightning fast romp through the steampunk bayous of an alternate New Orleans. Clark’s story bleeds with style, elaborate language, and unforgettable characters who are pulled by the undercurrents of hidden gods.”—Daniel H. Wilson, bestselling author of Robopocalypse and The Clockwork Dynasty

“P. Djeli Clark’s novella sunk its teeth into me from the first page, with a narrative voice that perfectly captures the spirit of The Crescent City. It chilled me to the bone, warmed my heart, and had me laughing out loud—sometimes all at once.” –Robyn Bennis, author of the Signal Airship series 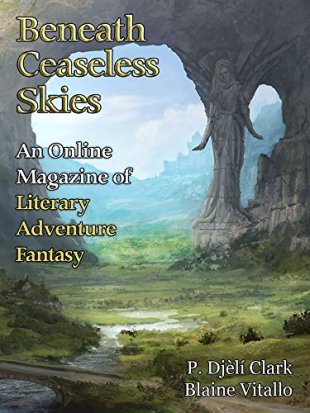 Fabled Aruth is said to have a pantheon of endless gods. Rana, initiate of the Order of Soothers, has arrived in the holy city on the eve of Festival on a secret mission. But the Mistress of Sorrows has set a winding path–one that will take Rana from the depths of Aruth’s underbelly to the heights of its most powerful nobles. Before its end, she will be forced to confront both the woe she carries within and the ravenous goddess she serves, who dines on the miseries of mortals.

Did I mention it has clockwork dread birds that pull carriages? How about ethereal sewing scissors and stitching needles uses as weapons?

“Author P. Djèlí Clark has an uncanny ability to pack his tales full of worldbuilding without slowing down the narrative, and a knack for creating characters you want to follow anywhere … This story showcases all those skills.”—Maria Haskins, Barnes and Noble, Sci-Fi & Fantasy Short Fiction Roundup: June 2018

“Clark delivers a well-balanced world that addresses devotion, friendship and a last act of mercy.”—Tangent

“The setting is complex and wonderfully laced with unseen magic, and there’s plenty of action, emotion, betrayal, and salvation to go around.”—Charles Payseur, Quick Sip Reviews 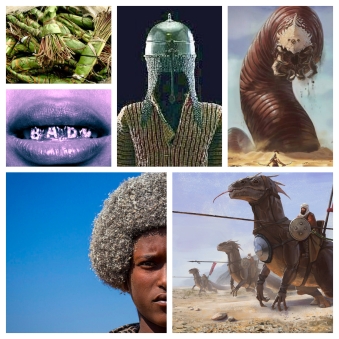 The plains of Golata are the site of battles between gods and demons, and the fanatical followers of those gods and demons. But people gotta make a living and there is all that sweet fanatical gear out there, so for those foolish and daring enough to risk the horrors the rewards can be great. But young Teffe will find more than he bargained for among the dead and dying, as he must decide whether to help a warrior fulfill a dying wish.

“…captivating fantasy novelette … Clark has spun a story that was hard to put down.”—Tangent 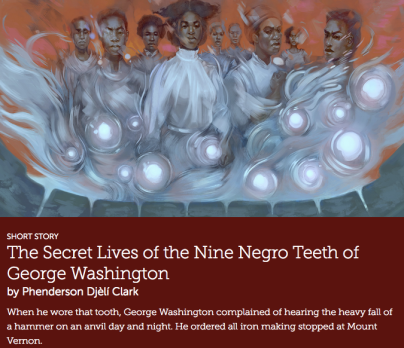 Nine brief vignettes for each of the “nine Negro teeth” purchased for George Washington. Set in an alternate world of sorcery and magic, the story weaves lives for the enslaved that meshes our own history of slavery with tales of mermen, necromancy, and wizardry to tell a story of oppression, resistance, and triumph in early America.

“In an alternate history where sorcery is real, each character brings their own psychic legacy to Washington, related in a brief paragraph at the end of each section, which lend a wonderful rhythm to the story as a whole.”—Locus magazine

“…the story builds a more and more fantastical past even as it keeps its core locked in the historical fact, the people bought and sold, the desire for freedom, the atrocity that sits at the heart of the founding of America … A fantastic read!”—Charles Payseur, Quick Sip Reviews

“…a phenomenal story about George Washington’s false teeth, telling the (literally) haunting story about the people each tooth came from. It’s a brilliant piece of storytelling, weaving together history, alternate history, fantasy, horror, and a wicked-dark sense of humour into a compelling and incisive tale”—Maria Haskins

“A moving story melding ghosts and magic and humanity into something far truer than either fantasy or history. “The Secret Lives of the Nine Negro Teeth of George Washington” proves that Clark is a writer to both watch and read. I wouldn’t be surprised if this story earns award nominations and reprints in various year’s best anthologies.”—Jason Sanford

*Reprinted in The Best Science Fiction and Fantasy of the Year:
Volume Thirteen (2018) edited by Jonathan Strahan.

And that’s all there is. Thanks all for taking the time to read and review. Your consideration is appreciated. Excelsior!