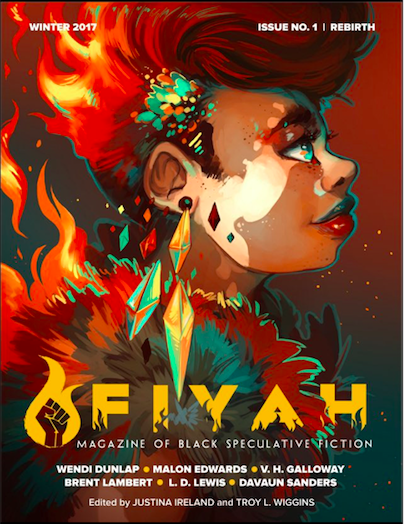 It was March 2016. I was in hustle mode. I was living in a small town in a-place-you-never-heard-of Pennsylvania, completing a year-long doctoral fellowship. This was the last semester to finish up my dissertation, with a defense date set for late April. Even more harrowing, I was on the academic job market doing interviews and campus visits. And I was teaching. Three classes. I barely knew right from left or up from down or a Rancor from a Gorog. Sh*t was real.

When it came to creative writing–fugetaboutit. I hadn’t written an ounce of SFF since the past summer. There were a few things, however, that kept me tethered to the creative writing world. I run a small secret cabal (not so secret any more) of black SFF writers called Fizzgig. Yes. it’s named after that Fizzgig. Know your 80s beasties. One of the members of that cabal is Troy Wiggins, who runs the blog Afrofantasy. We’d appeared in an anthology together once called Griots: Sisters of the Spear in 2013, and since then been kicking it in these social media streets. We often open up subspace pockets in space-time where we chat it up about writing, genre, race and what have you from time to time.

That February 2016, Troy told me he was toying with starting an online space for black SFF writers. And he was going to name it the Niggerati. Genius, I thought! I added, that to give it that SFF touch, it should be named something like the “Niggerati Space Station.” He liked the addition to the name. And just like that, the NSS was born.

For those not in the know, the original Niggerati was a salon in 1920s Harlem started by a group of black intellectuals and artists who met regularly at the home of the novelist, editor, and critic Wallace Thurman. It included the likes of Langston Hughes and Zora Neale Hurston. It was Hurston, in fact, who dubbed their meeting place Niggerati Manor, and their salon the Niggerati—an irreverent dig at the larger, usually white dominated, world of the downtown literati.

Like it’s predecessor, the Niggerati Space Station (NSS) took off, and fast became home to a cadre of diverse black SFF writers (many of them young) and creatives from varied parts of the diaspora. They talked, shared, vented, pitched ideas and offered support or help for one another. And I, who am decidedly not young, mostly sat back and soaked it up. I’d been in black online SFF spaces before–mostly with folks my age or older. This however, was different: the tone of talk, the topics of discussion, the focus of the politics, the push for intersectional stories that defied staid and rigid boundaries. The imagination was just fresh! This, I thought, is where the future of black SFF was going. And I welcomed it.

So about a month later, during another subspace chat with Troy, I pitched an idea that’d been rattling around in my head. My exact words were: “in my Kirk staccato voice, I…have…a…plan. for NSS. an idea. a fiendishly insidious idea. so are u familiar with the original Niggerati journal FIRE!! what if NSS did a SFF version of FIRE!! ?”

The idea had come about precisely because of my persistent frustration with mainstream SFF and a desire to see more out of the existent black SFF spaces. Don’t get me wrong, many of those black SFF spaces are doing great work and more than a few helped put me on. But, as with anything, there were blind spots. There were spaces and directions and things I wanted to see explored. I’d created Fizzgig for much of that reason. But that was a spot dedicated mostly to critiquing, to help develop and fine tune the craft to encourage more story submissions from black SFF authors. NSS, on the other hand, allowed for greater camaraderie: a place to lime, engage in discourse and spark creativity. It seemed the perfect place for the rebirth of FIRE!! After all, it was baked right into the name .

To combat both the marginalization of black writers in the mainstream literary world and the strictures that seemed to define contemporary black literary art, the members of Niggerati Manor began an experimental periodical in 1926 called FIRE!!  Its purpose was to allow black writers “to express ourselves freely and independently—without interference from old heads, white or Negro.” The first issue of FIRE!! included stories like Wallace’s Cordelia the Crude, about a teenage black girl who becomes a prostitute. Through the lens of a young aspiring artist, Richard Bruce Nugent’s Smoke, Lilies and Jade openly depicted black gay romance and sexual desire in 1920s Harlem. Zora Neale Hurston’s Color Struck used southern dialect and culture to explore sex across the color line and intraracial color consciousness.

That’s what I wanted a new SFF FIRE!! to be. When I’d first started writing SFF in my younger days it was bold. My stories were political. They tackled social issues. They said things I dared not say in public. I’d churn them out just to vent and be heard, all the while knowing no one was going to publish it. Because who was going to take a chance on a story about the ghosts of slaves returning to haunt the world? Or of black women in a hair salon coming across the means to exact vengeance on the justice system? Or a story where white people all over the world (poof!) disappear. Yes, all. Sorry. I wanted to see a space where black SFF writers today would feel free to dream how they wanted–without interference or self-doubt. As I told Troy then, I wanted FIRE!! to be a journal of “cutting edge stories. not a single f*ck given tales.things we don’t think can get published anywhere. politics, sex, queer eroticism, non-respectable. like… Cordelia the Crude Sex Android. …explorative SFF. whose existence challenges everyone.”

Troy was down. He urged me to pitch it to NSS. I did.

The proposal for a SFF FIRE!! was met with general enthusiasm on NSS. Different members began discussing how they envisioned the magazine and what it could be. I’d just thought of it being one stellar issue–as had happened with the original FIRE!!. But members started thinking about doing a series, taking the idea to grander heights. Everyone even got copies of the original FIRE!! to get a feel for things. It seemed to be going great.

But remember that academic hustle tho?

The time I had to dedicate to this project went from small to subatomic. Like gluons. It wasn’t long before I had to bow out of the NSS discussions. They went on for a while without me. And then, as these things go, the conversation drifted elsewhere. The spark I’d had for a black SFF FIRE!! caught briefly, sputtered, then died. And it might have remained that way if not for a few fateful incidents and some dogged perseverance by members of NSS.

On July 26 2016 the magazine Fireside Fiction dropped #BlackSpecFic: A Fireside Fiction Company Special Report. The write-up put the dearth of black authors in some of the more mainstream paying SFF markets on display. And it wasn’t pretty. Out of 2,039 stories published in 2015, only 38 were written by Black authors. More than half of all speculative fiction publications did not publish a single original story by a Black author over the span of the previous year. The report spurred debate, discussion and more than a few write-ups. One of them was mine. And as I wrote, thoughts of a SFF FIRE!! weren’t far from mind.

It seems, I wasn’t the only one. On NSS, while discussing the report, writer L. D. (Elle) Lewis declared, “I feel the NSS FIRE! project is very necessary now.” Other members agreed. Writer Justina Ireland at the same time called for an online black SFF magazine that could become an eventual “SFWA membership qualifying site” and put up some of her own money to fund the project. Over the next month, guided by L.D. Lewis and Justina and Troy, other members of NSS brainstormed on making the SFF version of FIRE!! an actual thing. I dropped in when I could to say “yeah” and “sure” and “that sounds good.” But in the main, that crew did the work–turning an idea into reality.

On Sept 1 2016 NSS pronounced the birth of FIYAH–complete with one bad ass logo:

The magazine now had a website created by L.D. Lewis and a Twitter handle (@Fiyahlitmag) manned by Brent Lambert, both of which helped spread the word and bring in subscriptions. Troy and Justina took on the mantle of editors, while other members worked as slush readers and all the things that go into creating a functioning, paying, SFF market.

The world got to see the result of all that hard work on January 1 2017 as the inaugural issue of FIYAH went live and available for readers. Behold this AMAZING cover, with art done by Geneva Benton:

The theme of this first issue is REBIRTH. The authors include more seasoned SFF writers like Malon Edwards, DaVaun Sanders and V.H. Galloway. Also included are newcomers like Wendi Dunlap, L.D. Lewis and Brent Lambert (all Fizzgig alum!) whose tales are going to dazzle readers!

A closer glimpse at the TOC and the stories within:

Sometimes we hurt the ones we love the most. This story of a future Chicago feels too real and achievable, and reminds us that no matter how far we stray there is humanity in every single one of us.

A new age of magic has come and it’s brought the apocalypse with it. Two brothers must journey to find out if there is a way to move forward from the sins of the past.

Sometimes the more we change the more things stay the same.  In this story, a woman learns that life on a new planet can be just as restrictive as life on the old one.

Do the accursed have the right to choose their path? In Engosfur Pools, accursed beings must decide whether to heed unseen voices that whisper of a new way, or undergo a deadly ritual to rid themselves of their curse.

When you’re an endangered species, your continued survival is not up for debate. How far will Eloko go to ensure that he lives to see another day.

A gilded cage is still a prison. Chesirah has decided fight for her freedom, and she’ll burn anyone who stands in her way.

As its mission states, FIYAH: sets out “to spill tea and throw shade in the most delightful way.” It aims to be as intersectional as it is interdimensional. It seeks out Black excellence, among stories of Black space captains, Black wizards and Black gods. It asks us to ponder what does it mean to be Black and extraordinary in new, exciting and refreshing ways. And it arrives right on time. Because as said, the future of genre is now. And it ain’t gonna write itself.

11 thoughts on “The FIYAH This Time”