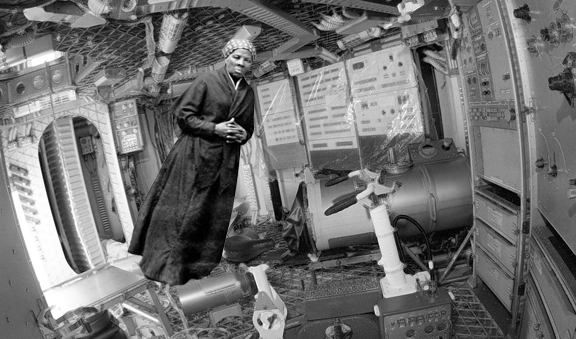 Harriet Tubman is finally set to grace the front cover of the $20 bill. For many it’s a dream come true, especially since folk been “dreaming of Harriet” for a minute.

Image: from a source I won’t name that seemed to be parodying black history with an allusion to “Harriet Tubman in space.” I am both jacking and subverting that sh*t.

“Follow me now, as I build my fanbases
Makin rappers worry like they got open cases
Harriet Thugman, y’all can see shit through
Like a whole world of people waitin’ for Episode Two.”–Harriet Thugman

The year was 2000. Rah Digga, the hold-her-own and not-to-be-messed with killer lyricist of Busta Rhyme’s Flipmode Squad released her debut album Dirty Harriet. The title was an allusion to the famed Harriet Tubman: armed leader on the Underground Railroad, Union spy and abolitionist.

Tubman was born Araminta Ross around 1820 as a slave in Maryland. She later took the name Tubman from her husband, John Tubman, and Harriet in memory of her mother. She endured the hardships of bondage, including a beating from which she never truly recovered, until 1849 when she fled (taking her body as stolen property) to Philadelphia and into freedom. Not content with finding escape for herself, she returned to Maryland: first to escort her sister and nieces to freedom, and then a third time for others. She would return repeatedly over the span of the next decade and a half to help more slaves make their way out of bondage. “I have seen hundreds of escaped slaves,” she would later recall, “but never saw one who was willing to go back and be a slave…slavery is the next thing to hell.”

Tubman did more than work the Underground Railroad. She immersed herself in the abolitionist struggle in the North, alongside figures like Frederick Douglass. She was a confidant of the white radical abolitionist John Brown, who reportedly took to calling her “General Tubman.” So infamous was Tubman in the wake of the Fugitive Slave Act, that Southern bounties were placed for her capture. During the Civil War, Tubman served as a nurse, a cook, a scout and a spy. She played a formative and active role in the June 1863 Union raid along the Combahee River in South Carolina, burning plantations and liberating several hundred slaves. though her precise deeds and accounts (and quotes) are contested between history and folklore, she looms large in African-American memory.

When Rah Digga settled on the title Dirty Harriet for her 2000 debut solo album, it wasn’t chosen lightly. She stated in interviews that just as Harriet Tubman “led people to freedom” along the Underground Railroad, she wanted to lead a cadre of women rappers into Hip Hop’s own Underground: that abstract space of emcee purists where lyrical prowess, metaphorical rhymes, and straight spittin’ on tracks is cherished with holy reverence. That this was too often perceived (incorrectly) as a “male-dominated” space made Rah Digga’s aims resonate with particular symbolism, given the ways in which black abolitionist history (when black abolitionists are studied at all) is itself often male-focused.

In a brief but passion-filled song titled “Harriet Thugman” (a fitting title if one remembers Tubman was quite literally a “law breaker”), Rah Digga’s throaty voice displays her lyrical dexterity over a bass-heavy track fueled by a sample of Lou Courtney’s “I’ve Got Just the Thing” (Hip Hop aficionados of the era might recognize the 1967 sample from X-Clan’s song “Verbs of Power” of ten years previous. Dig in them crates).

In “Harriet Thugman,” Rah Digga names herself the “The Harriet Tubman of Hip Hop” and urges rappers to “follow” her as she leads “a nation” up North, to an imagined utopia where police harassment doesn’t exist,  graffiti (that vital Hip Hop founding element) is respected as art and neglected emcees are given their just due. In a bit of prophecy, this utopia also has “Black Presidents” (a play on the 1990s slang term for money, Dead Presidents), there’s “no rich or poor,” and everyone makes merry in a legalized 420 paradise: smoking “a little Mary for the real visionaries.”

Rah Digga’s invoking (a literal conjuring) of Harriet Tubman is at once historical, imaginative, futurist, speculative, politicized and unapologetically black. And she’s hardly the first or last person to do so.

Harriet Tubman has been “imagined” and “re-imagined” in bits of speculative fiction throughout the years. She appears in an issue of DC Comics’s late 1990s The Kents, where we learn the ancestors of Superman’s adoptive parents once worked on the Underground Railroad. In Kevin Wilmott’s 2004 alternate history mockumentary Confederate States of America, Tubman helps Abraham Lincoln escape a Washington D.C. overrun by Confederates by dressing him in blackface. While Lincoln is allowed to live in Canada in disgraced exile, Tubman is executed by the new Southern government as an enemy of the state. Sanford Biggers uses the memory of Harriet Tubman’s nighttime navigation of the Underground Railroad in his art: as an Afrofuturist astronaut who travels along the stars. Octavia Butler’s Kindred drew on Tubman’s experience for the time-traveling protagonist Dana. Egyptian feminist Mona Eltahawy at the 2015 PEN World Voices Festival evoked both the spirits of Tubman and Butler in a speech laden with futurist political symbolism. In the story, Octavia Hernandez (named for Octavia Butler and destined to become the third consecutive woman president of the United States), helps found the international Harriet Tubman Underground Railroad “to offer feminist aid—be it to whisk away girls in danger of female genital mutilation, forced marriage and those in need of a safe abortion.”

Harriet Tubman also makes a surprise appearance in the film adaption of the absurdist 2012 film, Abraham Lincoln: Vampire Hunter. The late addition was the result of the novel’s author Seth Grahame-Smith, who realized rather last minute he had a white savior story on his hand. “We were dealing with issues like slavery and there was no African-American voice in the book representing anything but the victimization side,” he told interviewers, “and so where was the African-American fighting against this?” Epiphany happens when it happens. To correct this, the movie version turned to none other than Harriet Tubman. Portrayed by the actress Jacqueline Fleming, Tubman joins Mary Todd Lincoln in a Thelma and Louise type subplot, helping use the Underground Railroad in the fight against the Confederacy’s undead masses.

Perhaps one of the only full length novels of a re-imagined Tubman has been author Balogun Ojetade’s 2012 series the Moses: The Chronicles of Harriet. Here, Tubman is recast as a steampunk era, gun-toting fighter of slavery and the mystic world–taking on demons, monsters, dark magic and more, including an evil John Wilkes Booth. “I’m gon’ drive the evil out and send it back to Hell,” this Tubman declares, “where it belong!”

The Treasury Department’s decision to place Harriet Tubman on the $20 dollar bill comes with its controversies. Beyond the usual racist fever swamps, there have been African-Americans who feel conflicted about having a woman who was once chattel property become a symbol for capitalism–to which slavery was so intimately tied. Others also worry that in erasing Andrew Jackson, we may simply be papering over racism–literally. The fact that Jackson is going to remain on the back of the bill only makes the matter more bizarre. Yet at the same time, it is interesting to see America (as an institution and government) able to finally imagine someone like Tubman on the face of its currency–joining a long legacy of black (and other) folk who been imagining Harriet Tubman for years.