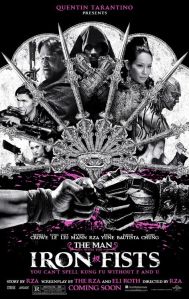 “It’s imagination. To imagine means to image. And once you make an image, you can make flesh. It’s power upon power. And it’s real. That power, that force–if you let it, it can move mountains.”–Rza, The Wu-Tang Manual

Earlier this week, Rza dropped the first trailer for his directorial debut martial arts flick–The Man with the Iron Fists. Set in a fictional 19th century China, it stars some premium actors, among them Russell Crowe, Lucy Liu and the incomparable Pam Grier. Rza, better known as the mentalist leader of the Wu-Tang Clan, and for digging in the crates to mash-up an orchestration of dissimilar sounds to lay classic Hip Hop tracks and score such films as Ghost Samurai and Kill Bill I & II, co-wrote the film and plays a starring role–as a martial arts blacksmith alongside a razor-fan slicing, gun-toting, golden-skin morphing cast of characters. For anyone even remotely familiar with Wu-Tang, and the mind of Bobby Digital especially, none of this should come as a surprise.

I’ve been a Wu head, and a fan of Rza, for a long time. Heck, I remember when Rza wasn’t even Rza, and had the ladies singing “Ooh We Love You Rakeem.” But the less said of that, the better. From their first single however, Protect Ya’ Neck in 1992, I was hooked. I’ve followed Wu’s many albums, their member solo-projects and more. I’ve also followed Rza in his many incarnations–as the Rzarector of the horror-rap group Gravediggaz to the urban futuristic superhero Bobby Digital. What I’ve always liked about Wu, is their inability to be easily defined or pigeon-holed as a certain “type.” Here are nine guys from New York who can spit lyrics about crime and drugs like the best Scorsese film, or as emcee extraordinaire Jay Electronica praised, with the literary flair of Theodor Dostoyevsky. Cuz if you can’t see the genius in Capadonna’s non-stop flow in Winter Warz, you ‘re buggin’!

Yet at the same time, they are geeks of the highest order–taking on names like Tony Starks (Ghostface), Johnny Blaze (Method Man) and making allusions to everything from Star Trek to U-God’s comic book collection. Ghostface has a whole video that’s an ode to Speed Racer, while Method Man plays a futuristic black Thundarr the Barbarian in the apocalyptic themed video Judgment Day. Rza hits the geek trifecta with lyrics like, “A Spaceknight like Rom, consumes planets like Unicron, Blasting photon bombs from the arm like Galvatron.” I mean Rom! Who says that?? Even fans have gotten in on the action, laying super hero animation over classics like Nutmeg. If Wu refuses to play into stereotypes of what Hip Hop artists are supposed to be, they also defy stereotypes of what lovers of speculative fiction should look like–instead exuding gritty, black, urban cool with a penchant for delving into physics and mathematics, without a pocket protector in sight. Thug Geekdom.

Yet, what symbolizes Wu’s interest in the fantastic more than anything else, is their love of martial arts–or rather Kung Fu movies. The name of the group itself was taken from the 1981 flick, Shaolin and Wu Tang, while their early lyrics and imagery consistently invoked martial arts themes (from the sound of slashing “liquid” swords to talks of flying guillotines). But it would be wrong to think Wu’s interest begins and ends with the “drunken paws” and “crane vs tiger style” television battles of their childhood. Wu-Tang created an entire philosophy that mirrored their synthesis and bridging of cultures.

Much of this came from 5% ideologies–a splinter group of the Nation of Islam, also referred to as the Nation of Gods and Earths. Often mistaken for universal al-Islam, the 5% belief is better described as a complex hybrid philosophical esoteric system that intermixes black nationalism, racial-mythology (the alleged invention of whites as inherent misanthropes by a wayward black geneticist named Yakub), scientific-folklore, numerology, freemasonry, mystical aspects of Sufist Islam, gnosticism, Eastern philosophies and more. ISLAM in this case is part of the “Supreme Alphabet,” and coded to stand for I Self Lord And Master or I Sincerely Love Allah’s Mathematics, while Mecca is a state of mind and being rather than a holy place.

This has (quite understandably) led to charges of cultural appropriation and misrepresentation by majority Muslims, who clearly distinguish between al-Islam and groups like the NOI and 5%. Though 5% adherents can blur these boundaries with their wordplay or varied interpretations, some of the more strict members clearly state they are not Muslims in the traditional sense. Rather, Islamic terms, iconography (the 5% symbol is the number 7 layed over a crescent moon and star within a larger star), even the name, are appropriated as symbols to a broader philosophy that freely synthesizes across religions, ideologies and cultures. More so than their NOI counterparts, 5% beliefs also tend to be malleable–with many adherents relaxing the teachings’ more rigid notions on gender and race.

Wu-Tang was by no means the first Hip Hop act influenced by the Nation of Gods and Earths, following in the footsteps of Rakim, Brand Nubian, Digable Planets and numerous others; 90s Hip Hop staples like “Peace God” and “Word is Bond” have their origin in 5% philosophy, as do phrases like “dropping science” or “kickin’ knowledge.” Anthropologist Ted Swedenberg in his 1997 article, “Islam in the Mix: Lessons of the Five Percent” provides a good analysis of the phenomenon during its more popular days in Hip Hop. But what set Wu-Tang apart was that they created an entire ethos around their beliefs, fusing it with their interest in Eastern culture, comic books and the fantastic.

In his 2005 book, The Wu-Tang Manual, Rza explains much of the “Supreme Mathematics,” a direct 5% philosophy, that underlay the group’s founding, their songs, and even behind the title of their first album–Enter the Wu-Tang (36 Chambers):

Mathematics is what we live. And the numerology side of it makes you aware of the connections between everything….A student of the Wu-Tang sword school would master higher levels of technique….So, break it down. You have the thirty-six chambers, and there’s nine members of the Wu-Tang Clan. Each member of Wu-Tang has four chambers of the heart. And what’s nine times four? Thirty-six. There are thirty-six fatal points on the body, and that times ten degrees of separation between each point equals 360 degrees. Therefore, the Wu-Tang Clan is a perfect circle, a cipher.

Rza goes on to recount his readings of Taoism, Buddhism and Confucianism–all of which served as strong influences upon the group, seeming to blend easily with the esoteric teachings of the 5%. He also highlights later spiritual trips he took across Asia, as well as his readings of Sun Tzu, the I Ching, the Tao te Ching, The Hagakure and more. Not surprising then that while usually rooted in high-action sword-wielding martial arts imagery, Rza’s creative works near always include some larger philosophical lesson.

The Rza inspired comic book, Nine Rings of Wu-Tang (2002), for instance, told the tale of nine black Moorish warriors in feudal China, “supremely gifted martial artists who are invincible as a team,” fighting a thousand-year war against evil. Yes, the comic is full of wise old Chinese sages with white whiskers and ancient knowledge, not to mention your share of scantily clad women–“fly colored Asians.” These themes would appear again in Afro-Samurai, which while not a Wu-Tang creation (it was originally written by Takashi Okazaki) was given the Wu stamp when the animated television mini-series (voiced by Samuel Jackson) was scored by Rza. The influences from Kung Fu flicks, Japanimation and urban Hip Hop in these works are unmistakable. But so are themes of racial boundary-crossing (black Islamic Moors in Buddhist China and futuristic black afro-haired Samurai), Eastern philosophies and a range of cultural forms of hybridity.

So when Rza fans heard he would finally be directing his own movie, we were–for lack of a better term–*geeked.* I’ve always said, if you let some of the more creative minds in Hip Hop get behind the camera, you’ll get some jaw-dropping ideas. Just imagine Ghostface and Raekwon writing and creating a full-on crime drama based on the lyrics to The Hilton!

The Man with the Iron Fists is co-written by Rza and Eli Roth, both students of the school of Quentin Tarantino. Naturally, I cringe whenever I think of the name Tarantino and movies with POC or based on non-Western cultures. This is the guy after all who touts the blaxploitation movie Mandingo as one of his creative inspirations, and has in the past used the n-word in his flicks like it was a conjunction. So expect heavy violence, sexploitation and some culturally cringe-worthy moments. Because according to the movie poster, “You can’t spell Kung Fu without F and U.” Yeaaarggh.

Still, The Man With the Iron Fists puts Rza behind the camera, so that’s a plus. And if the cast and trailer are anything to go by, it’s as much a cultural mash-up as any of his previous works–with a diverse cast, allusions to Eastern philosophies, a bit of science, some heavy mysticism and lots and lots of action. It took over twenty years in the making, but it seems one of Hip Hop’s visionaries may finally get the chance to step from behind the scenes to be introduced to a larger audience. It’s already worth it to see the words “Rza who?” buzzing through the more unhip corners of the geek-o-sphere. Hope it turns out well. Cuz the Wu, definitely got something we all been waiting for….

6 thoughts on “The Tao of Wu: The Man With the Iron Fists”