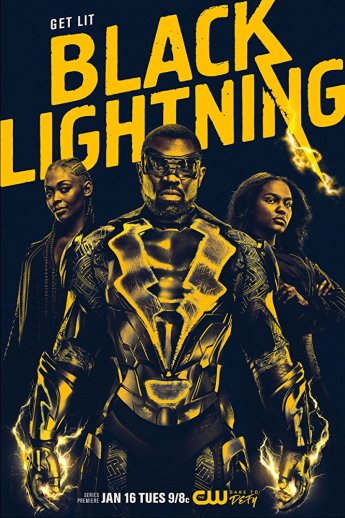 This week the CW premiered their latest superhero adaptation: Black Lightning, based on the character from the DC Comic. Sh*t got real. Some thoughts.

I’m not big on the CW’s DC hero-verse. I’ve given most of them a try–Arrow, The Flash, Supergirl, and even Legends of Tomorrow. But after a few episodes, none of them stick. Could be an age thing. The shows seem geared primarily towards a teen to twenty-something demographic. Then again, I binge-watched a whole season of Riverdale over the course a weekend. (And I am not ashamed) So maybe that ain’t it. Whatever the case, ain’t been my cup of tea. But I understand the series are pretty popular. So a whole lotta somebodies definitely like em’. And that’s all good. Do you.

As a more mature superhero, this Jackson Pierce works as a high school principal–attempting to save his crumbling inner-city one kid at a time. He hasn’t been Black Lightning in years, retiring to raise a family and gain some semblance of a normal life. So instead of the usual CW superhero coming-of-age story, we get a hero who’s been there and done that. He’s grown-ass folk. And Cress Williams does a great job in bringing that out.

He also has one heck of a supporting supa-dupa black cast. Call it the Wakanda effect before Black Panther even drops. But this is one of the blackest shows I’ve seen on television in a minute. Jackson Pierce’s former wife, Lynn Pierce, is played by the always stunning Christine Adams. Actor Damon Gupton plays police inspector Henderson. And real life eternal Bernie Sanders surrogate Nina Turner plays, well, herself I think. There’s also a sista in a blue dress who I don’t know but who I certainly, um, remember. Did I also mention most of these black folk, especially the black women, are dark-skinned? Yes. That’s important. See: colorism, gender and media.

The plot of the story is pretty much then what you’d expect–guy who wants out gets pulled back in by nefarious forces beyond his control. Those nefarious forces are a ruthless street gang called the 100. It’s members are villainous enough that by the time they force Jefferson Pierce to send a few lightening bolts to the chest, it’s a well-deserved and well-earned ass-whooping. We also get a look at the head bad guy in charge, the sinister crime lord and old nemesis Tobias Whale–the DC Universe’s closest version to a Kingpin you’re gonna get. They all conspire to turn Jefferson Pierce’s semi-normal life upside down, leaving him no choice but to become the vigilante Black Lightning again. Complete with a new neon suit.

Overall, it was an enjoyable premiere. I watched it twice. It was refreshing to see a nearly all-black cast doing at times all-black things. So was this nuanced and complicated take on Black fatherhood. There’s a memorable scene of Jefferson Pierce just running. Jogging. And his daughters joining in. Regular-ass, regular things. With black people. That’s not always as common on television as you’d think.

The show didn’t shy away from social issues either, tackling everything from police brutality to community activism. Gil-Scott Heron made a cameo. The scenes were shot beautifully. There’s one of gang members getting out slow-mo from a black car that’s so well-rendered it looks like a classed-up Hype Williams piece. Even the score is on point, with new school Hip Hop and old school Black soulful classics. Black Lightning seems to have it all.

But… (and you knew there was a but) I was left feeling some-kinda-way about certain themes in the show.

The main theme is kinda the “be careful what you wish for” mantra. You wanted an all-black everything? With all-black show runners? Well, you gonna get some all-black villains. Well mostly black anyway. In this case, it’s the gang 100. They turn out to be Jefferson’s real scourge in the episode. And make no mistake, they’re terrible. They’re drug dealers and murderers. They threaten young women with sexual slavery. They walk up in a school with guns and threaten kids. There’s no point in this show when you don’t want to see them get their asses kicked. Royally so.

They’re also like 99% young black males. By the time Black Lightning gets to doing his thing, you can’t help realize that here is an older Black man beating the hell outta (and at times killing) lots and lots of young black males. The optics are jarring, if you let your mind wander there. That’s not to say there aren’t other bad guys. The cops here are pretty shady as well, showing barely veiled hatred towards black citizens. And there’s the allusion that they’re corrupt. But, even as one cop puts it, they’re still lots better than the gang. Police here are a nuisance. They’re not, however, the ones that pose the greatest threat to Black Lightning and his community. It’s not the system he fights against. It’s, wait for it, Black-on-Black Crime.

Yeah. Black Lightning is probably the best ode to “What About Black-on-Black Crime” I’ve seen on television in a minute. Take the episode intro. Jefferson Pierce is in a police station waiting to pick up his daughter Anissa who’s been out protesting. Billie Holiday’s Strange Fruit (the Nina Simone version) plays in the background, as a distraught black father on the television recounts the murder of his son by the gang 100. The transference of this haunting song about lynching and white supremacy to the ills of black inner-city crime, is pretty hard to miss. The television goes on to show the community out protesting the gangs, with the newscasters saying things turned violent when members of the gang disrupted the protests. But what protest footage does the show use to illustrate this? Protestors from Ferguson and other recent places where police brutality has been in the news.

ARE YOU F&*$% KIDDING ME RIGHT NOW? DID YOU JUST USE SCENES OF BLACK PEOPLE PROTESTING AGAINST POLICE BRUTALITY TO TALK ABOUT GANG VIOLENCE? WHAT IN THE WORLD OF FOX NEWS IS GOING ON HERE?

At times, these political takes leave the show disjointed. Anissa is arrested out protesting the gangs, but we learn the protest ends up with police cars getting burned, and then they’re pulled over by shady cops. None of that actually makes sense. “Hey Dad, went out to march against gang violence and we ended up torching a police car.” Whatever message the show is trying to get across (for which its received lots of praise) its really hard to pin down. Or maybe its not. The politics in Black Lightning mimic the politics in Netflix’s Luke Cage–where some older father figure type black male must step in to clean up the community. And this may simply be the show’s attempt to rebuild on Black Lightning’s origins.

The hero first appeared in the 1970s, alongside an era of  Blaxploitation-derived characters. Captain America No. 117, 1969 introduced The Falcon, a one-time Harlem Hustler turned crime fighter.  Marvel in 1972 Hero for Hire No. 1 also gave the world Luke Cage, known better as Power Man. Wrongfully imprisoned, Cage becomes a medical guinea pig and accidentally receives super powers. Like the ghetto-superstars of the screen like Shaft and Superfly, these heroes nearly all came from crime-plagued urban backgrounds where they tended to do most of their super-heroing: taking on drug dealers, gangs and the like.

In the 1970s DC wanted in on this new era of diversity in the hood. The first idea they came up with was the Black Bomber, a white bigot subjected to biochemical experiments who during times of stress turned into a black super-hero. Taking Watermelon Man to absurd new heights, the Black Bomber remained unaware of his dual racial identity. Only his girlfriends–one white, one black–knew his secret. His costume was similar to that of the Harlem Globetrotters. Luckily for brain-cell preserving humans everywhere, DC creators claim to have convinced DC that a white bigot as their first powerful black super hero would be the worst idea in the history of worst ideas.

The Black Bomber was scrapped and work began on another character: Jefferson Pierce, Black Lightning. In the original DC universe, Pierce grew up in Metropolis’s Suicide Slum, a place sorely neglected by Lois Lane’s journalism. Running afoul of brutal hoodlums Pierce becomes Black Lightning, a blue jumpsuit wearing crime-fighter with electrical powers. A schoolteacher, Pierce wasn’t exactly like kung-fu street hustlers like Luke Cage and The Falcon. But he fit the persona: a black hero who was Black and Proud, and who’s main job was to clean up his community. Invited to join the Justice League of America on larger ventures, Lightning famously turned down the lily-white outfit stating, “With that bunch of jive turkeys? Forget it!”

This new Black Lightning seems to be following a similar course. Updated for a 21st-century audience, certainly. But very much in the same vein. At least for now. And that’s pretty much what the show’s creator Salim Akil wanted, as he made plain in interviews:

“I just drew from my life,” Akil said. “Jefferson is already a community-based superhero, he’s already a principal, he’s already a father. It gave me an opportunity to talk about things that were personal to me. I grew up in a community like Freeland. I was surrounded by those things that you see in Freeland and in Chicago and Oakland. It came naturally. It wasn’t a choice made out of, ‘Hey this is what we want to say.’ It came out of a choice of, ‘This is what I know, and this is what we know so let’s do what’s real. Let’s do what’s authentic and real to me,’ which I think everybody embraces. I’m appreciative of that. It’s very personal to me.”

Well can’t argue with that. As writers, as creators, we always bring our experiences and our visions to the process of imagining the speculative, the fantastic. Gotta say tho, I had really hoped that this new take on Black Lightning might be able to imagine more. To be, more. That he might move beyond the black “community-based superhero.” And even if that’s his role, beating up and electrocuting young black gang members seems like the lowest of low-hanging fruit. “Black-on-Black Crime” meets “Black-on-Black Vengeance” seems to be the box Black Lightning is ever placed into.

Does he ever move up the ladder to take on a cabal called the Gentrifiers?  How about the Payday Loan lender mafia? After the eventual showdown with Tobias, is he gonna start shocking environmental corporate polluters? Maybe send a few bolts at congressmen whose policies cause urban blight and decay? Will he ever get to save the hood from mad-scientists bent on global domination? Inter-dimensional horrors loosed by rifts in space-time? Cyborg-zombie hordes manufactured by shadowy government agencies? How about alien invasions who decide Freeland is a perfect place to start a colony? We can call them the “Ko’Lumbus-ites.” Can Black Lightning be imagined beyond the limits he was first placed into?

I suppose I’ll have to wait and see. A part of me strongly wants to. Again, I actually enjoyed the show despite all these criticisms. Maybe that’s what bothers me the most. As I watched Black Lightning deliver a righteous beat down to save his daughters, all I could think of was Kendrick Lamar’s XXX—“Let somebody touch my momma,
Touch my sister, touch my woman…” And that ain’t a healthy place to be.

2 thoughts on “Black Lightning’s Back”