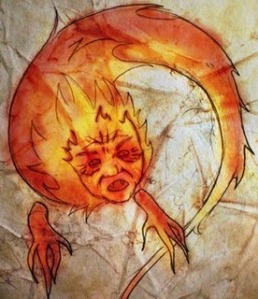 Ghosts, ghouls, werewolves and skeletons are what most of us think of us on Halloween. But as a recent NPR article reminds, many of us have brought our own monsters and folktales from different cultures to add to this blend. And like so much else in America, our imagining is made richer by it. The denizens of our many diasporas now haunt our Halloweens.

It’s Halloween. Time for trick-or-treat, NSFW costumes for the socially inept and the ultimate in race-fails for the hopelessly clueless. Not to mention the willfully depraved and terribly indifferent. Enough can be found on human beings behaving like monsters here- The First Rule of Blackface. But in this post, I wanna talk about the real monsters we like to conjure up on All-Hallow’s Eve. So add some more newt-eyes to the witch’s brew, and let’s do this.

My favorite part of Halloween is the ode to the monsters–the mummies, witches and vampires that go “blah.” We take a joy in devoting a day out of the year simply to scare ourselves. Not like we don’t scare ourselves enough on any given news day in our mundane lives. But Halloween is different, because this time we delve into the supernatural, with images and stories of ghouls and monsters that lurk in the dark recesses of beyond our world–our own Danse Macabre.

Halloween in America, once the domain of immigrants and popularized in the 1920s and 1930s, has origins in older European traditions. And though the holiday has come a long way from its distant Samhain Celtic roots, both still represent a belief in a time when the boundaries between this world and nether realm are weakest. We’ve simply replaced turnips with pumpkins for our Jack-o-Lanterns, made our version a lot more gory, and filled it with ghosts and things best left unseen that go bump in the night. But that’s not how it is everywhere.

Though I was born in the United States, I spent the early years of my life on the Caribbean island republic of my parents–Trinidad & Tobago. Halloween didn’t exist there for me. I wouldn’t learn about trick-or-treating and the association of the end of October with bags full of candy until I emigrated back to America. But the time period still held otherworldly meaning. A one-time Spanish and then British colony, Trinidad inherited certain cultural norms. This included All-Saints Day and All-Souls Day, held respectively on Nov. 1st and Nov. 2nd.

On these days I didn’t go trick-or-treating. But I did know that a particular boundary-crossing was happening–a blurring of our world with another. All-Saints Day was a day to observe the intercommunion of the living and the dead, those on Earth and those gone on. My Anglican grandparents would spend time cleaning the local cemetery, whitewashing the graves of relatives and decorating them with flowers. And though there was no candy, there was some damn good food to be had. My favorite part however was that night,  All-Souls Eve–the Commemoration of the Dead. While All-Saints Day seemed more a solemn affair (that might include a church service and chores even), the eve before All-Souls seemed more magical.

That evening my grandmother and our neighborhood would light candles. Lots and lots of candles. There would be candles in the cemeteries, on the gravestones, all over our house, up the front and back stairs–everywhere! When we ran out of candles, I’d be sent to our neighbors to pick up a few left over from Diwali. In fact, used to get the two ceremonies confused as a kid, as they fall a week or so apart. I’d sit up as long as I was allowed, watching the candles light up the night, and you couldn’t tell me there was no magic there–that I hadn’t somehow been transported to another world.

We didn’t have any ghosts or ghouls to go with this festivity. I wouldn’t get that part of “All Hallow’s Eve” until emigrating back to the states. But I picked up on it quickly. Because in Trinidad, we had no shortage of things that lurked in the dark. The boundary-crossing that Americans dedicate to one day of the year was just about *every day* of my childhood, where I took the supernatural as a given.

My grandparents warnings were endless: from not picking mangoes at night (the tree in our backyard was said to be resting and would make the fruit sour if I disturbed it needlessly) to waking me up and correcting the direction I slept in, because the living should not lay like the dead. When the dogs began their nightly barking fits, my grandmother shut our windows, claiming “the witches were out.” And she could tell if something “unseen” followed me back into the house (because unseen things, I learned to my horror, often latched onto children and snuck in behind them), making sure to burn the right bush to make it go away. People visited far off relatives to warn about a dream they had of them crossing over water, or slaughtering a cow. Uncles spoke of seeing jumbie (mischievous spirits) on a dark night road, and women gathered to shell peas or knead roti, whispered about people “putting ting” on this one or that one.

These superstitions, bits of folklore and beliefs came from the cultural mix that was Trinidad–the stories brought by African slaves, East Indian indentured servants and European colonists. We didn’t just have ghosts, we had Douens: the souls of children that take the form of hideous little creatures with no faces and backwards feet. We had Raakhas, evil newborn babies in Indian-Trini folklore who attack their own parents. We had La Diablese (sometimes Lajables: “La-Jah-Bless”), a devil woman who hides her cloven hoof beneath a sea of petticoats, enticing men to their doom. And we had Mama Dlo, a woman with long flowing hair who hides the lower half of her monstrous body–that of an anaconda or similar giant snake–in mountain pools and lagoons. The Soucouyant was probably the most frightening figure from those childhood stories, a vampiric fire spirit that shed its skin and traveled about at night sucking away the life from the living. My Hindu neighbors also filled me with tales of  Churile, a vengeful spirit of a woman who died during childbirth, seeking to inflict suffering on other pregnant women. I haven’t even mentioned Carnival that would come a few months later, full of its menacing devilish and fiendish Jab!

But All-Souls Eve and the fearful monsters of my childhood had no actual connection. All-Souls Eve was never something frightening. Cleaning cemeteries and placing lit candles on graves was rather mundane. Soucouyants and Douens weren’t waiting for one day of the year to carry out their mischief; they were things to be wary about year-round! It wasn’t until I returned to the United States that All Hallow’s Eve took on a more fearful cast and became populated by mummies, ghouls and vampires that go “blah!” As I assimilated to American culture, my image of Halloween became filled with “typical” “American” monsters.**

Then, way back in the late 90s, speculative fiction author Nigerian-American Nnedi Okorafor wrote an article called Diaspora Denizens Haunt Halloween.* In the article, Okorafor did her own bit of boundary world-crossing, adding folklore and monsters from throughout the African Diaspora (from Nigeria to the Caribbean) to American Halloween. It was a stroke of genius. One I was amazed I had never before thought of doing. It wasn’t that I forgot about Douen or Soucouyant, but I had kept them compartmentalized, distinct from Halloween. Somehow I thought of them as monsters for Trinidad, not America. Okorafor’s article was an eye-opening look at black double-consciousness and cultural pluralism, themes that increasingly inform my thoughts on speculative fiction and the fantastic.

To celebrate Halloween this year, NPR’s Codeswitch created a piece titled “The Creepiest Ghost and Monster Stories from Around the World.” They decided to set about asking people to tell them stories from their own diverse cultures, tales of ghosts and monsters not “typical” to American Halloween, but which nevertheless mirror the ghouls and werewolves we’ve come to associate with the day. What they got back were, “stories of creatures stalking the shadows of Latin American hallways…vengeful demons from South Asia with backwards feet…were-hyenas and…infernal bathroom stalls.”

Infernal bathroom stalls ya’ll! We been missing out!

So this Halloween, I’m going to spend some time learning about the many bits of folkloric beasties, creatures and spirits collected from the various diaspora that now make up the American mosaic. I can only imagine how over time they are going to change our ideas of a “typical” Halloween. If you have any that you’d like to hip me to, I’m eager to hear it!

Meanwhile, if yuh not too fraid of, turn down the lights and listen to this of story of Soucouyant by author Nalo Hopkinson- Greedy Choke Puppy, from her book of Diaspora tales, Skin Folk. And Happy Halloween.

*The article by Nnedi Okorafor has since disappeared from the interwebs, along with the website African.com that hosted it. If I could remember the date of its original posting, I’d look it up on the Way Back Machine.

**In full disclosure, I didn’t celebrate Halloween “traditionally” (trick-or-treating) as a kid even after I arrived in the US. My parents thought it was some American excuse to eat badly and rot your teeth. So I kept my teeth and I didn’t really miss it. But I was exposed to it through public school and in all the MA/YA horror books I read, so it became part of my cultural understanding. It wasn’t until high school that I became involved in teenage Halloween night shenanigans (we shall not speak of those) and started going to Halloween themed parties, events, etc.