So I’m flipping through a magazine on the plane to Trini I see an ad for Trivi-Con 2012. Did I read that right? A convention of comics and cosplay just in time for my arrival and stay on the Caribbean island? What were the odds? And how could I possibly miss it? My Trivi-Con experience to follow.

It took a few days of investigation to find the “right” people who knew about the event. Most had no idea what I was talking about. But through some sleuthing I quickly found out. It turns out that Trinidad & Tobago–an island republic of 1.2 million people–has several cons, cosplays and speculative fiction related meet-ups held by different groups throughout the year. The largest I was told was held at the Hyatt Regency at Port-of-Spain. Wish I could have gone!

The one I arrived in time for, Trivi-Con 2012, was put together by a small start-up called Akcess Power. Billed as a mini-convention and anime-trivia contest, it was mainly focused on gaming, manga and comics. It was held in San Juan, Trinidad–at a place that was not exactly the easiest to access. It took some family connections to get me to the open air spot the venue was being held in–a vast change from cons in the US, which usually keeps their nerds enclosed and penned in to assure their freshness.

What I found was a small gathering of perhaps a hundred or more people (I’m terrible at crowd guessing) and a hodge-podge of sci-fi, fantasy, comics and more. With sparse resources, the organizers of this event took a spartan route–converting a covered concrete hanger usually used to throw outdoor parties or small concerts into a space for tables and booths.

Among the attendees, I would say the majority were younger–from their teens to early twenties. In the back, there were a large amount of gamers, huddled around flat screens, competing for trophies. Others took part in Yu-Gi-Oh and other trading card games. Neither bunch, which may have made up half the crowd, moved around much, intensely absorbed (as gamers tend to be) in their play. I watched them for a while then moved on.

Closer to the front of the con were the comic book guys–most of who were older, in their 30s and some in their 40s. These consisted of tables trying to sell off an assortment of comic-related items. One or two were actual comic sellers; others were just hoping to move some things out of their collection. One table of interest was run by a pharmacist who shuttles between Miami and Trinidad every other month (his airline bonus miles must be bananas!), and collects and sells on the side for fun. Between the old comic books he was hawking were a few thick tomes–DC Universe Encyclopedias, etc. But the item that caught my eye was a small statue of what looked like an elephant-headed Ganesh dressed up as a Blue Lantern. He explained to me that he actually picked up several in Miami and bought them back to Trinidad–where he knew (in a country that is 26% Hindu) it would draw the eye.

About then, a local aspiring artist who goes by the name Darth Gog (seriously) entered the convo, and hipped me to these Hindu-inspired Blue Lantern. Turned out he’s part of the DC comic world (that much I’d gathered–I’m not a complete rube) and his back story can be found in the Blackest Night Saga. I then told him that I hadn’t really read any DC Comics seriously since I was a kid, and had long ago been converted mostly to Marvel. This (naturally) set off a lengthy three-way debate over which of the giant big book industries–Marvel or DC–reigned supreme. It’s kind of refreshing to know that whereva you go, the geek-o-sphere arguments tend to be the same.

But beyond the mainstream popular comic books, there were some indie home-grown ones as well. One of these is Midnight Robber, a comic created and drawn by local artist and entrepreneur Chris Riley. The story draws its inspiration from the home-grown folklore of Trinidad, of the mysterious high-talking bandit the Midnight Robber–long a staple of Carnival costume and revelry. Others may know the Midnight Robber from author Nalo Hopkinson‘s work of the same name–which combines Afro-Caribbean culture with futurist imaginings. Riley transforms this popular figure into a dark superhero, who tussles with Douens, Jumbee, Lagahoo and other folkloric menaces of the night brought to life. As he explained, after growing up reading popular comic books from the US, he wanted to create something that celebrated Trinidad’s cultural heritage and knack for fantastic storytelling.
To this end, Riley and his brother co-founded the local 3Quarter Comics, which features a host of other local comics, creators and artists. 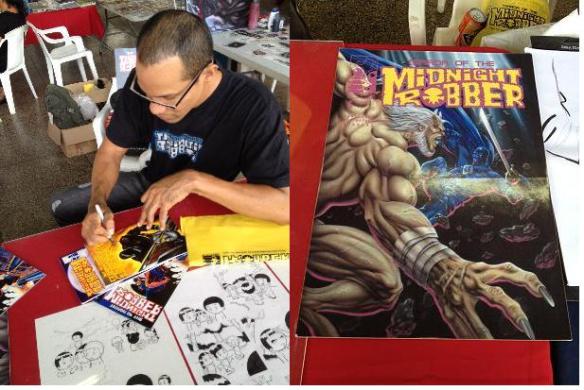 Sprinkled throughout the event were a few cosplayers as well. As the mini-convention could not give out prizes this year, their numbers were low. As some online photos I was directed to illustrate, they’ve been much larger at previous gatherings. Still, there were a few–many inspired by anime figures, Lord of the Rings and even a Jedi. There was even a Naruto sing-a-long.

One of these cosplayers also creates her own manga–an anime Elf fantasy sword and magic mash-up called Galaxy Elf. Yes, I said Galaxy Elf. As her manga plot line goes, Galaxy Elf “follows the adventures of a young elf princess Ariantha, who is also a fire-mage, and her friends as they travel among the seven planets of their galaxy on a quest involving swords and sorcery, love triangles, mysterious triangles, space.” Yeah. I know. That’s a lot going on. But gotta love the imagination. And she’s a pretty good artist to boot.

All in all, it was a nice lime amongst the members of Trini-geekdom–small, but full of energy. There was even an archery lesson and competition–for all those would-be elves I suppose? Being a Trini convention, there were those few odd things–sweet plums and kurma being sold amongst some old dusty comics, and people also pitching Trini coin collections. I’m surprised there were no doubles.

What I did find missing was a surprising lack of steampunk anything–though I’m sure if I did some digging, there’s some to be found somewhere. I also didn’t see much in the way of African or Indian inspired fantasy (beyond Chris Riley’s comic), as many of the younger cosplayers were greatly inspired by Japanese anime culture. Refitting that to a Trinidad cultural niche (where descendants of Africans and East Indians are the majority populace) is something I suppose will come, in time. At any rate, it’s a niche I’m certain some people some where are hoping to fill.

I asked comic artist Chris Riley about the whole speculative fiction scene in Trinidad. He expanded his arms with a laugh and said, “You’re looking at it. It’s still growing, but definitely getting larger.” I hope so.

7 thoughts on “Trivi-Con 2012: Comics, Cosplay and Gamers in Trinidad”