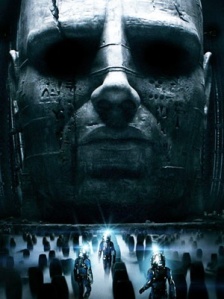 So, apologies for using the word “white” in a second post in a row. But I just saw Ridley Scott’s Prometheus and it seemed apropos. I’m not going to give a long drawn out analysis of the flick (though I will give a smart alec’y recap), just a few observations and thoughts. And just so you been warned, it’s chock-full-o’ SPOILERS.

So I was really excited about Prometheus coming out. Then it premiered and nearly everyone I knew–or didn’t know–told me just how terrible it was. This brought my excitement meter crashing, and I hesitated. Finally, I went ahead and bought a matinée ticket and sat down with a bag of smuggled in popcorn and apple slices (I have weird movie-watching tastes) to check it out for myself. What I found was that the movie did not live up to the hype of those awesome trailers–yet neither was it the utter train wreck I’d been led to believe. Here come the spoily SPOILERS.

Prometheus begins with some stunning imagery of what we learn is an early Earth. In fact, the whole movie is shot vividly well—like they had those guys who filmed Planet Earth on the set. Anyway, so on this early Earth is this hovering space ship and it’s making those weird noises like the monolith on 2001: A Space Odyssey. Standing on a riverbank is a lone alien–who we will soon learn is Giant Albino Caucasian God (GACG). Because naturally, as we long suspected, God is big white guy with kinda Nordic features who doesn’t tan well. Confirmed! GACG drinks some really nasty stuff that causes him to fall into the raging river and disintegrate, and his cells flow into the water supply and end up seeding the planet. In your face abiogenesis!

Flash forward to the year 2089. Humans have gotten quite fancy with the technology, gone into outer space, mastered interstellar travel and created human-like androids, but for some reason haven’t explored all of Scotland. So two archaeologists (Noomi Rapace and Logan Marshall-Green), find paintings in a prehistoric Scottish cave which match writings/pictographs from all over the world telling of prehistoric and ancient giant alien visitors (GACG) who created humanity.

As is the case whenever some fringe scientists get a kooky idea (in the movies), they get a wealthy near-mummified benefactor (Guy Pearce) to throw them *trillions* of dollars and hire a space craft to shuttle them to the planet where the aliens can be found. For a while, the rest of the movie reads like a dozen sci-fi flicks made in the past few decades. There’s a team of assorted people who are sent out to do a mission far more dangerous than they’re aware. There’s the requisite wide-eyed scientist, the doesn’t-play-nice-jackass team member and the characters who you can’t remember and have no identification with, but are certain won’t make it to the end of this. Then there are the main characters. There’s Charlize Theron as the tough-as-nails corporate overseer; Michael Fassbender as the requisite snarky inhuman android who makes thinly veiled insults at humanity with a pleasant smile and Idris Elba as the pilot, just an accordion-playing, Christmas-tree-lighting average joe company man here to do a job.

They (naturally) find the GACG pretty quickly and run afoul of a few horrid beasties right out of some Lovecraftian nightmare. In fact, there’s a whole lot of similarity here to Lovecraft’s Mountains of Madness that many have previously noted. The android, acting on company orders, does nasty stuff to people with a warm serviceable demeanor. People encourage their own demise by doing a series of stupid things (poor decision making skills all around) to end up dying gruesome (somewhat sexually phallic) deaths from this tentacle-alien thing created by this black goop, while Noomi Rapace (in a scene that will make your jaw drop into your popcorn and apple slices) performs a c-section abortion *on herself* to remove a nasty squidy that’s been inserted into her belly via her boyfriend scientist, who had to be immolated by Charlize Theron because the android had infected him. See? Isn’t that simple? Oh yeah–Elba and Theron hook up. Sweet. But no actual visuals. Waaaack.

We eventually learn that the GACG go around creating life on other planets, or as author Kameron Hurley put it, “White Dudes Seeding the Universe with their Magical Man-Sperm.” Turns out GACG don’t require ovaries. So one of the GACG wakes up and he’s *pissed* for no apparent good reason–not the morning type? Ripping off the android’s head he then uses it to bludgeon everyone, finally allowing us to see that amazing “death by android head” we’d always imagined. Turns out the smartest guy in this film is the captain who somehow deduces that what they’ve found is an alien military installation where they perform secret experiments to create WMDs (the black goop). There is no way you get that, without him telling you. So don’t try. Noomi Rapace puts 2 and 3.9846 together and realizes the GACG were heading to Earth to wipe out humanity 2000 years ago–but then got sidetracked when their black goop engineered tentacled bioweapon turned on them. Now the recently awakened GACG decides to stop loafing about and finish the job. And this is where things get a bit familiar–at least they’re familiar if you’re a fan of the original Alien flick. GACG activates his ship and the cockpit emerges–just like the one Ripley and friends will later find that giant (GACG) sitting upon on the derelict. GACG tries to take off, but Idris Elba and his crew (resigning themselves to death with the casual acceptance of that string quartet on Titanic) suicide-ram the GACG’s spaceship, sending it crashing down on the planet–where it crushes Charlize Theron (of course).

This leaves Noomi Rapace the only survivor. With staples in her self-administered C-section the only thing holding her together, she manages to flee to the escape ship only to find the remaining GACG determined to kill her. I guess if you can’t kill all the humans–one will do. But the squidy-alien-thing she’d gotten impregnated with has grown re-freakin-dicously fast into a re-freaking-dicously vicious tentacled monster. She looses it on GACG who it ends up killing in another phallic love embrace. Then, making a pact with the ever-smarmy android (he’s just a head now) she agrees to take him from the planet if he gets her on one of the other GACG ships so she can go find more of the GACG–because that’s a good idea. We’re then greeted with a final after-film scene where somehow the tentacled-alien thing (after absorbing GACG) gives birth to a love-child that begins to take the shape of our favorite xenomorph. Aha!

So there you have it–Prometheus. If there’s a word to describe this film, it’s ambitious. The visuals were stunning and the scenes were packed tight. Perhaps too tight. Prometheus felt like it should have been about five separate movies–as if Ridley Scott wanted us to know everything, right here and right now. Some critics claimed the film didn’t have a plot. Oh it had a plot alright–about ten. I got the movie. I understood its point and what it was trying to say. Well except for all that Nietzschian banter and the subplot about religion. Still, I at times don’t know how I got there and I’m not sure what I should take away from it in the end. Why the GACG created us and why they decided to erase us is still a very big question mark that I suppose only Noomi Rapace and her android-head side-kick are ever going to know. I think Prometheus might have been a great movie, if it could manage to knit together these many scenes into a working movie–or movies. It also doesn’t help that between the decades since the first Alien film, it seems I’ve seen many of these plot devices in all the mimicking sci-fi flicks that followed. This film gives us all of that, from the requisite horrible monster-thing to skinny white women who spend an inordinate amount of screen time in their underwear.

So, not a great flick…but not a god-awful one either. Just something I’ll likely have to watch about three more times on DVD with those cut scenes that might make all the difference. Hopefully no one tries to make a prequel to Predator….with GACRG (Giant Albino Caucasian Rastafarian Gods).

1 thought on “Oh My (White) Gods!- My Snarky Prometheus Review”