There’s a scene in Steven Spielberg’s 2006 film Munich, where the Israeli assassination team sent to seek vengeance for the slaying of Israeli athletes at the 1972 Olympic Games, end up at a safe house in Athens where they unexpectedly run into a set of Palestinian radicals. Changing their identities, the Israeli assassins name themselves radicals as well–taking false identities ranging from a Basque liberation group to an anti-apartheid freedom fighter from South Africa. Though the scene, like much of the movie, is more fiction than history, it did spark a thought. There was this era radicalism in the 1960s through the early 1970s that had global reach and interconnectedness. With the fall of the old colonial empires, struggles to knit together new states and domestic social movements, many people sought to radically change their societies or rebelled against it outright–through protest, confrontations with authority or by any means necessary. Many of these radicals not only knew of each other’s existence, but also promoted far-flung causes as relatable to their own–so it wasn’t abnormal to see Black Power advocate Kwame Toure (Stokely Carmichael) making impassioned speeches to a packed groups of Swedish students, or have Malcolm X and Fidel Castro meeting in a hotel room in Harlem. So, I got to thinking. With the many spinoff genres of cyberpunk (steampunk, dieselpunk, atomicpunk, etc) delving into alternate histories and societies shaped heavily by some technological advancement, what about something similar but shaped instead by ideologies and politics? What about a world where this radical fervor never died away, but grew stronger, defining the world as we know it? How about some Revolutionpunk!

Okay. So I don’t even know if I’m saying anything original here. Still, stay with me. Within all of the various speculative fiction punk genres, the social and political often play strong supporting roles. In cyberpunk, not only do we have near-future of cybernetic, digital, nano tech gone amuck, but (at least in the original noir settings) we also get either society-governments that have broken down, become corporate-controlled or turned into technocratic fiefdoms. The more retro-futurist steampunk creates worlds not only powered by a steam industry, but may coincide often with the rise of modern nation-states, nationalist civil wars or societies where free-thinking is suppressed. You can find similar themes in the combustion-age dieselpunk, with its state sponsored militarism, allusions to the rise of fascism and struggles against it, while the fission-powered atomicpunk may concern itself with everything from the effects of atomic fallout to the Cold War. These are basic descriptions of course, as the post-modern approach to these genres allow for a great deal of overlap and bending. I’m sure a search through the Venetian city-states of Renaissance clockworkpunk or the electro-powered world of teslapunk can yield their own unique temporal political themes.

What’s interesting is that there’s a “punk” genre for nearly every period, except this mid-1960s through early 1970s period of global radicalism. Atomicpunk does push into the the early 1960s, but (as far as I’ve seen) mostly takes its inspiration from the 1950s and futuristic imaginings of the “home-of-tomorrow” or The Jetsons, common to the period. Then we flash past the mid-1960s and early 1970s and end up in the 1980s, wherein we can start-up the cyberpunk trope.

Odd, that in the US for instance, this monumental period of social unrest, depicted by the SDS, antiwar movements, Black Power, Hippies and Yippies, just seems to fall through the cracks of the varied punk genres. Or it could be, I just haven’t seen any works that directly define or address it. There’s a case to be made for it perhaps in Alan Moore’s Watchmen, where the 1960s/early 1970s is depicted with a great deal of speculative fiction–and alternate events (the US winning Vietnam, etc.) resulted in a different world by the 1980s. Yet even here, while a heated Cold War and Richard Nixon (who is still President!) play out as holdovers from this earlier time period (illustrated very well in the Watchmen opening intro with a Bob Dylan track), the radical social movements that also defined the era do not appear to have survived the conservative backlash–and instead seem to have been replaced by violent punk youth gangs like the Japanime-imitative Knot-Tops .

The question I’m posting then is, do the sub-genres of punk always have to rely centrally on technology–especially when many of them focus so heavily on things like fashion? There are already many varied sub-sub genres that aren’t always initially defined directly by tech–spacepunk, cattlepunk, oceanpunk for instance–but instead perhaps by a central theme or environment, that may create its tech to suit its particular need. There’s even gothicpunk, which is more so about vampires and other supernaturals running the world. I don’t even know where stitchpunk begins to fit in. We’ve got so many suffix ending punks now–from biopunk to ipodpunk (we may already live there)–there seems to be a space, and a desire, to imagine beyond the boundaries set out by the earliest genres.

Of course, there is the question of whether many of these retro-futurist punk genres don’t reflect our own insecurities of the future–so instead of facing it, we go looking in the past for a time we can control, and manipulate and re-imagine. Perhaps steampunk, clockworkpunk, dieselpunk, teslapunk and so many others are a form of ultimate escapism–certainly beyond that of the original cyberpunk, which had us facing (even if uncertainly) a possible dystopian and dreary future. And eventually we’ll have so many replications based on varied themes they will work themselves into their own apocalyptic irrelevancy.

Yeah. That’s possible. In fact, I’m going to say rather probable. But that’s for a whole notha’ blog. In this one, I’m going with the retro-futurist bit–for the pure sake of it being damn fun.

So can the politics and social movements of alternate-retro-futures instead be the dominant theme for new ideas on punk, with the tech as more so secondary? If so, how could we imagine this sub-genre I’d like to call Revolutionpunk!

What if the turbulent, radical movements of the 1960s and early 1970s never lost their potency? In the US, what if the Civil Rights Act had never been passed? What if the Vietnam War hadn’t ended, despite the protests, but continued to expand and send draftees into a decades long stalemate? How radicalized might segments of the US population  become?

What if radical social justice groups from the Black Panthers to the Brown Berets to the anti-racist White Panthers (yes, White Panthers–that happened!) still existed and were popular as ever–with varied splinter groups? What if the Stonewall Riots had engulfed all of New York, as other groups turn it into a large-scale rebellion? The Wounded Knee Incident sparks similar occupation-style movements in cities and towns. Gloria Steinem has become leader of the Redstockings after a failed women’s liberation movement, while SDS is an opposition political party holding office within the system. Tommie Smith and John Carlos were arrested for subversive activities when they got back from the 1968 Olympics.

Such groups, protests and even peaceful sit-ins are banned by the Department of Homeland COINTELPRO (DHC), which has been put in charge of monitoring all domestic dissent and creates its own pseudo-radical groups (derisively called NRs- Neo-Reactionaries) to support its interests. Bull Connor is governor of Alabama. J. Edgar Hoover is president!

What might a nationwide police force (under the control of the DHC) built on repressing protests and social unrest look like in this retro-future? What kinds of weapons are used for non-lethal crowd control? With radical groups now in the underground, how might late 1960s/early 1970s tech (from early computers to transistor radios) help them keep in contact–and one step ahead of the DHC? What kind of clothing might identify radicals to one another? Armbands? What splinter ideologies and factions might develop in these times–Maoist Flower Power? Trotskyite-Psychedelics? Anarchist-Capitalists? (no wait, that last one is real!) Neo-Reactionary Moral-Majority-Yippies led by a tie-dye wearing long-haired Pat Buchannan? What kinds of posters or art symbolize this radical fervor? What banned newspapers or books might make popular reading for a young revolutionary? Perhaps popular music, unable to be repressed, has been adapted to the state and remains much in the vein of the early Beatles and The Supremes; alternatively, music out of the tradition of Bob Dylan and Jimi Hendrix rule the underground–along with an emerging style called Funk. Banned performer James Brown “Say it Loud” is a hit on the global underground airwaves. Radio Free America disseminates info via coded verses by The Last Poets.

And there’s no need to stay in the US. Che Guevara wasn’t killed in Bolivia, but helped radicalize much of Central and South America–creating a larger sphere of Cuban Castro influence. The brutal repression of Stalin sent the USSR under new post WWII convulsive revolutions, and there are now three separate Soviet Republics–only two of them communist. Radical youth groups roil Europe, as varied movements seek to overthrow established governments that have become increasingly autocratic in response. China remains locked in revolution and stalemate, where Maoists control most of the country but nationalists manage to hold on to important strategic regions, and new factions emerge. The end of WWII didn’t bring about the downfall of colonialism, and anti-colonial rebels attempt to force out the British Raj in India while in Congo the Patrece Lumumba Brigade continue a decades-long struggle against a Belgian state notorious for its atrocities.

Okay. So you get the idea. Fashion? Flip open any book from the period–miniskirts, berets, afros and long hair, remain chic! Tech? Think retro-futurist James Bond spypunk gadgetry, otherwise facetiously known as modpunk, build from there. There are endless photos and art (like that of Emory Douglas) for inspiration. No need to fully romanticize the period either (at times so common in retro-futurists genres like Victorian-era steampunk), as conflicts within groups and controversial tactics can be part of the varied stories. It’s a world in the midst of revolution and counter-revolutions, where politics is radical, dissent is as American as apple-pie and dreams of utopian states and postcolonial futures spur on cadres and comrades in transnational struggles.

REVOLUTIONPUNK! Can you dig it? 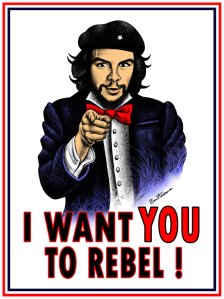