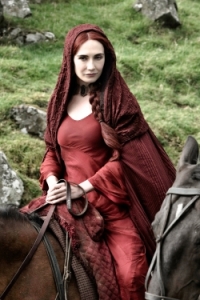 Another Sunday, another episode of Game of Thrones. And what is there to say except, “let the blatant divergences from the book in order to get some cheap thrills and push through to some larger plot devices begin!” But as an old roommate who happened to be film student once reminded me, movies are not books, even if they’re based on them. There are always changes made–the question is, do such changes help improve on the original storyline or dramatically alter it into something unrecognizable? As usual I’ll try not to give away any real SPOILERS regarding future parts of the storyline for those who haven’t read the books, though I may allude to a few.

So we start off with some Lannister men joking about Renly and Loras’s man-love, before Robb’s dire wolf makes a meal of them. We then get to see some of what is so well done in the book, graphically depicting the horrors of war when people are involved and you’re not just offing hordes of orcs, trollocs or insert-your-sub-human-stand-in here: ________________. Robb walks the battlefield, as the maimed and dying lay scattered and screaming about him. To emphasize what a good guy the King of the North is, we get to see him tending to a wounded Lannister man. Robb is deftly contrasted with the cold Lord of Dreadfort (he of the chilling soft-spokenness), Roose Bolton–who sees nothing wrong with a good flaying. Most interesting here was Robb’s interaction with a tough-as-nails nurse named Telisa, who forces him to morally defend his vengeful choice to go to war. There is no such person in the books. And though HBO is being annoying coy about the casting, it’s likely that this is some incarnation of Jeyne Westerling. If so, giving her a bigger role than afforded in the book is a worthy change, and might even help better explain the fateful decision of which she will eventually become a part.

Littlefinger makes an interesting appearance, engaging in newly inserted scenes with Margaery Tyrell and Renly Baratheon. Not sure what the purpose here was, other than to show that the “whoremonger” is always in-the-know and is universally disliked. But they do use the moment to show another added tidbit that diverges from the book, in the reception of Ned Stark’s bones to Lady Catelyn–which was a nice touch that allowed her to show emotion, brought back memories of the most noble figure (Long Live Ned Stark!) of this convoluted cast (even if naive) and reminded viewers of that murky back story between she and Littlefinger (maidenheads and who took em’). Also included was some humorous banter between Stannis and Renly, which helped highlight the contrast between the two would-be-kings as rather estranged brothers.

One of the best parts of the episode was Arya Stark’s arrival at Harrenhall, which looked just as creepy and eff’d up as I always imagined it. We get a return of the Mountain (Gregor Clegane) who leads a group of men skilled in the famed rat-bucket-fire torture trick, which they employ on the smallfolk with cruel abandon. This larger theme, the unspeakable suffering of common people in the midst of war as they fall prey to all sides of the conflict, is a major part of George RR Martin’s books. Rape, torment, whole-sale-slaughter of innocents, mayhem and terror, are all used as legitimate tools of war by varied combatants–and its good to see it confronted here. Of course, we get a major divergence in the arrival of none other than Lord Tywin Lannister (he-who-sh*ts-gold) who inexplicably makes Arya Stark his cupbearer?!? I can understand a need to shorten Arya’s lengthy Harrenhall stay and tie it into larger subplots, but where the writers of the tv series are going with this I’m not really sure. I wait with bated breath.

Finally, we get to see Daenerys Stormborn across the sea, as she arrives tired, hungry and begging at the great city of Qarth. In a scene quite divergent from the book, she gets into a minor kerfuffle with The Thirteen–a prominent group of traders–in which she has to show some teeth to gain entrance. The Thirteen also have gone through some changes. There was some minor grumbling in the nerd-o-sphere when actor Nonso Anozie was cast as Xaro Xhoan Daxos, as the British-Nigerian actor seemed a far cry from the tall and pale “Milk Men” as the book describes the people of Qarth. I had little problem with this change, as I thought the idea of tall pale people living under the scorched sun of the eastern continent was a bit of “high fantasy” in itself. As it turns out, none of the Thirteen–including the portly guy who gives Daenerys such a hard time–seem to match this description. Seeming aware of this, the TV show has Xaro Xhoan Daxos describe himself as one of the Summer Islanders, who the Qartheen allow to rise to great heights in the city even though he’s a “savage.” Interesting, as I don’t recall that the Thirteen were separate from the people of Qarth (nor that they or anyone else considered the Summer Islanders “savages”) so I’m not sure why they couldn’t just make him a Qartheen without such dramatic “othering.” Go figure.

Back in King’s Landing, Tyrion continues to prop up his power, punking the foppish Lancel (Cersei’s new cousin-lover) into spying on his sister. He also confronts Joffrey the Monster who, in typical Joffrey fashion, enjoys having Sansa Stark beaten by the local knights. It seems the show’s writers, determining we just aren’t sure quite yet whether Joffrey is reaaallly a monster (what kid doesn’t chop off the heads of his future bride’s family and then demand that she watch them? it’s just a phase…), has him engage in some weird psychotic prostitute abuse. However, the scene isn’t from the book. It seems to be yet another bit of sexposition, which is beginning to make the writers of this show look more pervy (if that was possible) than George RR Martin.

The episode ends with a return of the Red Lady Melisandre, and a birth scene that newcomers to the story will have nightmares about for at least a week. Till next week, wherein Strong Belwas goes nutz at the local lunch time pizza buffet. . .