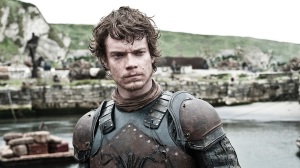 Another Sunday, another episode of Game of Thrones, and things are heating up! Well… no. They’re just simmering  to a slow boil. I know the whole adage of the watched pot, but these watched plots need to pick up the pace. There are only two more episodes until the end of this season, and we are very slowwwwly working our way to a series of climaxes. Just wish they’d get on with it already. As usual, minor SPOILERS to follow.

In Winterfell, Theon’s brutality has only made his hand weaker. His older sister has arrived, but without the necessary reinforcements he’d been hoping for. She shares a touching moment with Theon, urging him not to stay in Winterfell and die; but he seems to have his made his bed. Oh yeah, Bran and Rickon aren’t dead and are hiding right under Theon’s nose in Winterfell. Surprise! Well, not a surprise if you’d read the books. Though with Meera and Jojen still conspicuously absent, never know what the writers at HBO are going to do to further stray from the original storyline. Then again, wasn’t so much of a surprise either if you hadn’t read the book–as the entire plot twist seemed so forced I think most people figured it out before hand. If this is going where it should going, by the end of this season Theon will be well on his way to mumbling, “You have to remember your name.”

Back at the immobile Stark camp, Robb is furious to find out that his mother has let loose the Kingslayer in the company of Brienne of Tarth–hilarity and hijinks with those two shall ensue. He ends up being convinced by Roose “speak-softly” Bolton to let him send his son (yes that son!) to take the castle back from Theon. Be afraid! Be very, very afraid! His relationship with not-Jeyne-Westerling-but-really-is-Jeyne-Westerling, continues to evolve…and we learn two things (1) the people of Westeros really wear too much clothing and (2) the King of the North has made a very fateful decision about his impending nuptials. I think the color for the wedding should be…red.

In Wildling land, the Stark bastard is a prisoner of The Lord of Bones and is saved a smile in his belly by Ygritte, who now considers them even. You still know nothing Jon Snow. He also meets up with another prisoner, his scout leader Qhorin Halfhand, who devises a plan. Meanwhile, Sam and the others find an old Nightwatch cloak buried in the snow with a stash of dragonglass. That’s going to come in very handy later.

In King’s Landing, the calm before the storm of Stannis’s arrival finds everyone idling the time away–except Tyrion who has sense enough to worry. Everyone’s favorite Master of Whisperers, Varys the Spider, makes an appearance (his second I think for the season) and he consults with Tyrion on the city’s defenses. Cersei makes her play against Tyrion–and gets the wrong sex worker (no, not Alayaya–that storyline doesn’t exist in this Westeros reality). Joffrey struts around like a pompous idiot and brags about single-handedly defeating his  step-uncle (the image of the Monster facing Stannis in hand-to-hand combat is priceless), while Varys and Tyrion take care of the real defense of the city.

In Harrenhal, Arya Stark hears Tywin Lannister’s plans to attack her brother. She tries to find Jaquen H’ghar to do in the elder Lion, but doesn’t find him in time. Annoyed at this, she forces the Braavosi assassin to help she and her friends (Meat Pie really just talk about pies) escape in exchange for un-invoking his name in her death wish. Ever clever Arya.

Stannis (yeah, remember him?) has also returned to the picture, as his vast army sails deliberately for King’s Landing. During a talk with Davos the Onion Knight, the king reveals his deep-seated “nobody-appreciates-me” issues from the previous war that unseated the Targaryens. If I were to criticize anything very harshly by the way in this season, it would be Stannis’ near non-existence. He is a central character. His voice was the one in the cold-as-hell trailer–“They will bend the knee or I will destroy them!” Yet since shadow-baby, he’s pretty much been incognito–along with Melisandre.

We do manage to get a brief Khalessi sighting, following a Varys mention in King’s Landing. She and Jorah Mormount …blah… blah… my babies… blah…blah… mother of dragons… blah blah. They appear to be taking the *slowest* route to the House of the Undying possible. What? Do they need friggin’ directions?

This episode seemed to be a set-up for everything that is bound to come. I’m guessing (hoping) the last two can deliver on all their promises. See you next time, wherein the Kingslayer ponders if he’s ambidextrous.